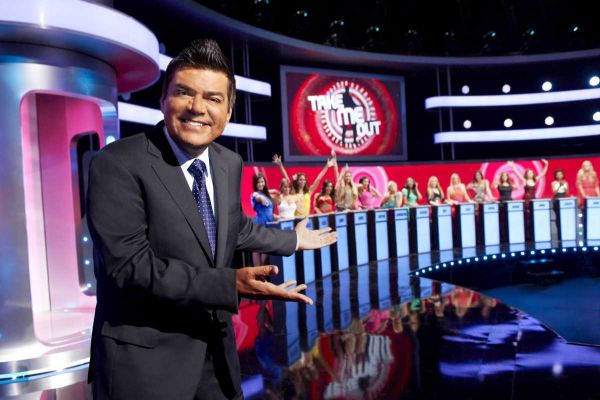 Review of Fox’s New Dating Shows: One Hit and One Miss

When we think about summer TV in general we usually think “Hit or Miss”.  It’s a crap shoot, but it’s a hell of a lot better now then it was before.  Fox rolls the dice with two dating shows, “The Choice” which I warned was coming and “Take Me Out”.  Two dating shows with completely different feels to them airing back to back.  Let’s start with the bad, or should I say the awful.

How this show works is simple.  You have four male celebrities who cannot see their potential dates as their backs are facing the stage. The potential dates come on stage and are seen by the audience and then get to describe themselves to the celebrities.  Based on the audience’s reaction and their voice and description alone if the celebrity is interested he pulls his “love handle” and turns his chair around. Once a celebrity or two has turned their chair, then the contestant gets to choose what celebrity she wants to date.  Once a celebrity has 3 women in his stable, they then eliminate one, and have a question and answer lightening round to decide between the remaining two, who they will go on their date with.

Sounds like a lot….and it is.  The concept is good, but the execution is bad for reasons that would have been hard to predict.

The interesting part of the show is the fact that you see how men think.  Sometime the celebrities just turn around based on the crowd’s reaction. Other times you can see what the guys is thinking by the one thing that the woman says that gets him to pull the handle.

THE BAD: IT’S JUST NOT BELIEVABLE

That’s about where the fun ends. It falls apart with the celebrities.  It’s hard to believe that any of these guys can’t find a date for themselves.  The first episode featured, Olympic skier Jeremy Bloom, Pauly D, Romeo, and Soap Opera Star Jason Cook.  ….Oh yeah, Tyson Beckford will even be on one episode. If these guys can’t find dates then there is no hope for mankind. The second part of the issue is that celebrities are actually boring and corny.  People are pretty boring and corny in general but we expect celebrities to be witty, interesting and dynamic because their TV characters usually are.  With no script in front of them, they are just like you or I and that’s a huge disappointment.  This show relies way too much on the celebrities personalities to carry it and that’s where it fails, terribly.

Cat Deeley does her best as host, but the lack of personality is so obvious that it makes her job extremely difficult adding to the shows cluster.  I attempted to watch the 2nd show but once the celebrities were announced and appeared even more boring than episodes one’s, I had to cut it off.  Those were minutes of my life I was never going to get back.

TAKE ME OUT: A CLEAR WINNER!!

This I have to admit left me pleasantly surprised.  I actually watched “the Choice” first so my expectations were just about as low as they could be for this show.  Take me out is a show that started overseas that was brought to the states so the concept is proven.

How the show works, there are 30 women who all stand behind podiums that are illuminated.  A guy comes down a love lift to a theme song that he has chosen.  When he gets to the ground level he walks in front of the women so they can see the goods and then takes the center stage.  He introduces himself and then the fun starts.  After the introduction, if you are not turned on by this guy, you turn your light out.  At this point a number of lights will shut off, making a video game “loser’ noise with each one. Then the contestant gets to show a home clip of himself, usually explaining what he does for a living and his family and home life.  Any time during this video clip you can turn out your light if something is not appealing.

If a man still has women with lights on, he enters round three.  This round he can display a talent or show more information about his personal life.  If there are any lights on after the third clip then the man has a date.  If there are more then 2 lights on, the man narrows it down by shutting off the lights of the person he’s not interested in.  This is all by looks at this point because very little if no conversation has been had between the contestant and his potential date.  Then he gets to ask 1 question to the 2 remaining women.  From their answers he chooses the dates.

This show works for many reasons. The biggest one is George Lopez.  Hands down he is great.  I’m not sure if he is saying to himself, “Is this what my career has come to?” Or if he is having the time of his life but it appears he enjoys it.  His comedic improv is 2nd to none.  When women shut their lights off, or keeps them on, he asks them why or why not, he introduces the men an basically carries the entire show on his back.  He’s funny, charming and charismatic and makes you just enjoy being there. His timing is just impeccable.

The other thing that works is the show doesn’t take itself too serious.  It’s cheesey but in a way that it’s embraced. When a love connection is made, a sing a long type song is played and the women, referred to as the flirty 30 do a Macarena type dance while the couple walks off.

If a male contestant doesn’t make it through round three, it’s known as a blackout.  Lopez always says, “it’s not you it’s them”.

Which is just plain hilarious.  The couples go to the “Take Me Out” resort and their date is recapped on the next episode.

The show is everything a summer show should be, Silly and fun.  At the same time you get to also see how picky women are.  You should see how many lights turn off when one guys says he likes to eat at restaurants that offer specials!  Wow!

Both shows are on Thursday nights.  Take Me Out is wisely first at 8:00 PM followed by The Chose at 9:00.

If you’ve seen either show leave a comment and let me know what you think.