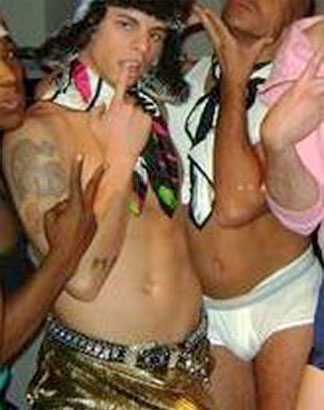 Well for one, he can’t be Gay because he is with Lopez, so at best he is bi-sexual.  Radar Online interviewed another back up dancer and a friend of Smart named Joshua “Josh” Lee Ayers.

He basically said that Casper is really gay and is only using Jennifer Lopez for her money and fame.

Joshua was in the movie “Step Up 3d” with Casper and after talking to Radar Online, went on to talk to In Touch Weekly as well.  He explained how Casper was in a two year relationship with a women named Aisha Francis who was actually the one that got him the job dancing for Lopez in her video “Dance Again”.  Casper was still with Aisha at the beginning of his relationship with Lopez and dumped Francis  when she found out from TV and tabloids that Casper was dating the super star.

Joshua then goes on to tell In Touch that Casper is,

“willing to do whatever Jennifer wants as long as it furthers his own career.”

Three months ago, Joshua posted a picture of a shirtless Casper wearing shiny gold short shorts with a stuffed crotch on Twitter with the caption:

“Check out UR boy….And his low key homo ways.”

Jennifer and Casper’s rep has slammed the allegations, stating,

“Casper is not gay. These comments are born from envy and jealousy.”

If there is truth to this rumor we should be seeing a bunch of so called former boyfriends of Casper popping out to the  wood works Travolta style and two Jennifer Lopez wont’ care, she’s all heard it before.

No sure what Joshua “Josh” Lee Ayers goal was in trying to out Smart, but if it was to break up him and J-Lo he’s going to have to try harder than that.  Trust me, I hate Casper just as much as the net guy but these allegations are just lame.