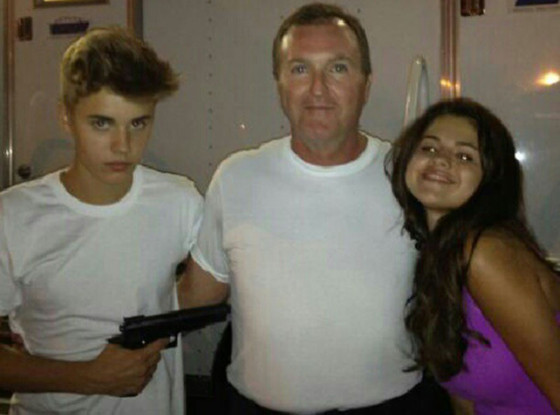 Justin Bieber Packing Heat and Sends out a Tweet – He’s Not a Role Model.

Bieber gets the dummy of the day award after this photo of “The Bieb” was posted posing with a gun.  Justin was visiting his Boo, Selena (Gomez) on the set of her new moving “Feed the Dog” when he thought it would be a great idea to snap a picture of himself holding a gun.

No problem, just the Bieb having a little fun right? Well the photo was posted on Twitter, just like everything that Justin Bieber does which means that millions of little children around the world can now see Justin Bieber holding heat.  Great.

You numb-skull.  Have you tuned in to the news lately?  Remember a little mass shooting at The Dark Knight screening? How about a crazed gunman on the Empire State Building a week ago?  Or maybe a Marine that went berserk just days ago at a New Jersey Pathmark?

Yes it’s a free country but tone it down even if it’s just for now.

A writer from Canada’s Globe and Mail wrote,

“Guns are on everyone’s mind as a serious crisis in Canada and the United States. Everyone, that is, except maybe Justin Bieber,”

A writer at Hollwood life wrote:

“Justin, whether you like it or not, you’re a role model. And millions of fans, 27 million on Twitter, are following your every move. You have power in this industry, and holding a gun in jest is just plain foolish,”

Usually I’m not that sensitive to these types of things, but shootings are just getting outrageous.  Yes, Justin Bieber has the right to post pics it’s a free world, but a little timing, and common sense could possibly go a long way.

Oh….and yes I’m just as guilty because I’ve just spread the picture on the internet, to all of my 26 faithful readers. None of which are children.  (I hope).