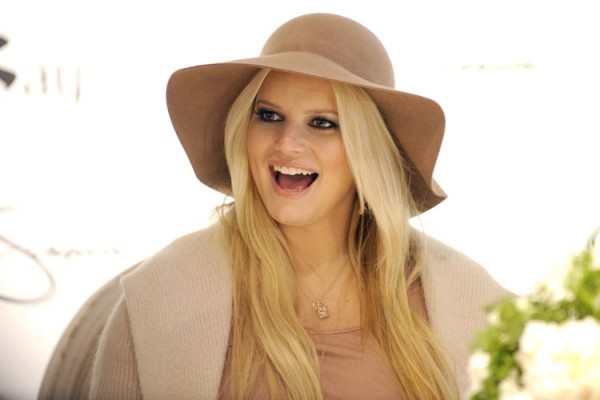 Jessica Simpson Reveals Weight Loss Struggle – I Think it’s all a Set Up!

Jessica Simpson says that she is only 10 lbs from her pre baby weight but I’m not buying it.

Remember when she was pregnant and gossip bloggers were saying that she was getting too big too quick, that a 50 lbs weight gain was way too much and then activists started fighting back?

“I say that pregnancy should be a time of situational obesity, akin to situational alcoholism in college. Yeah, it’s probably not the healthiest way to be and there are certainly some risks involved and you certainly have to deal with the fallout (I’m still struggling to lose the baby weight, six months later), but it’s a cathartic experience that could arguably make you a better, happier person. But whatever the case, f**k anyone who talks s**t on a pregnant woman’s weight. As far as I’m concerned, they’re the pigs.”

Well guess which pig is having trouble dropping all the weight? Simpson gave birth on May 1st, four months ago. For the average woman or housewife that is not a long time at all, but for a weight watchers spokesperson, actor and singer that’s long enough.  Beyonce and J-Lo (with twins) shed their weight quickly, but they also were very conscious of their diet, they didn’t take the liberty of stuffing their face to their hearts content.  They had the wherewithal to keep their careers in mind.  Honestly I think the overeating was a way for Simpson to stay current, stay relevant and in the media.  It was an easy way to get attention and it worked landing her various magazine covers and a lucrative weight watchers contract.

Now Simpson is admitting that she could have possibly over indulged,

‘I let myself indulge in everything I wanted because it was the first time I was ever pregnant, and I wanted to enjoy it.

‘I didn’t know [the weight] didn’t all come off with the baby.’

What??? Of course she did.  What she meant is, she didn’t realize that she would have to work her ass off to lose the weight.  Ever since her role as Daisy Duke, she has struggled with her weight and it’s been material for much public fodder.  There has been speculation that she is still a fiancé and not a bride because Eric Johnson was not happy with her weight gain before she became pregnant.

Despite her claim of being just 10 lbs above her pre-baby weight, Simpson says that her breast are still too big to run, which poses another challenge:  no jogging, jumping jacks, or vigorous aerobics.  Simpson said that her body is not responding quickly,

‘My body is not bouncing back like a supermodel.

‘I’m just your everyday woman who is trying to feel good and be healthy for her daughter, her fiancé and herself.’

I THINK IT’S ALL A GIMMICK

She says that she will still reveal her new body on Katie Couric’s new show, on September 10th.  I think she probably looks spectacular.  All of this admission of overeating, super slow weight loss, and body not responding talk is just setting us all up.  We will be expecting a Jessica Simpson that looks thinner but not tight, and she will wow us all.  I will be posting the pics talking about how fantastic she looks along with 1000 other websites.  She will win again as she will be given all the attention she craves. With that will be numerous covers, and extended media circuit and probably a swimsuit or lingerie magazine layout or two.

We will know in a few short days.  Monday is the big reveal.  What do you think…am I right?