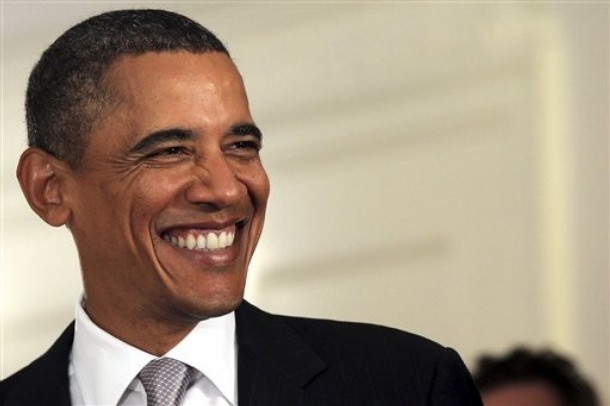 Obama Personally Addresses Nicki Minaj – Fools Her Into Endorsing Him!

Last week we talked about Nicki Minaj and the verse she spit on Lil Wayne’s,  “Dedication 4” mixtape where she actually endorsed Mitt Romney.  In case there is any confusion, here are the lyrics one more time:

Let’s get another thing straight, the POTUS wasn’t running around giving two skittles about Niki Minaj, but he was questioned during an interview on Florida’s radio station 95.3.  So before you jump on the band wagon of criticism about Obama having better things to do, then think about Nicki Minaj, first question yourself, then question the radio station at 95.3.  If I had the honor of interviewing the 1st Black President of the United States, I would be embarrassed to even utter the words, “Nicki Minaj”.

However, the radio station asked Obama if his daughters were fans of Nicki Minaj.  He replied…..not so much,

“I don’t think they really listen to Nicki Minaj that much, But let’s face it, they are now hipper than me. There’s a certain point where your kids get old enough where they’re hipper than you are.”

“Michelle and I, for folks of 50 or as she likes to point out close to 50, because she’s not 50 yet, we try to keep up so we’ve got a nice Hip Hop collection on our iPods,”

They then bring up the track and play a little for the President.  Here is where the President is simply a subtle genius….This is why he will win in debates against Mitt Romney; he might not win the election but he will win the debates.  He has the ability to make moves that you and I don’t’ even see coming and deliver them so smoothly that you don’t even realize that it was a move.

Let me explain why this is actually important.  You and I might see Nicki Minaj as an overrated clown, but like Lady Gaga, Justin Bieber, Rihanna and the rest of the modern day Pop icons, with twitter, facebook and the internet, these people have millions of blind followers.  You only have to be 18 to vote.  I know more than my share of 18 year olds that will blindly do anything Rihanna does….Get the connection?  So does Obama. He knows Nicki Minaj is an idiot, but she is a tool that if used correctly could help.  He knows this before the question is even asked.

So after they play the verse president Obama says,

Yeah, I’m not sure that’s actually what happened. I think she had a song on there, a little rap that said that. But she likes to play different characters. So I don’t know what’s going on there,”

Guess what? It worked.

After hearing word of the interview Minaj tweeted a thanks to Obama for understanding,

“Ha! Thank you for understanding my creative humor & sarcasm Mr. President, the smart ones always do… sends love & support,  Now I can tell my grandchildren that the 1st black President of the United States took the time to address a Nicki Minaj question.”

Did you read that?  Love and Support.  She is now an Obama Supporter (despite reports that she’s not a registered voter).

Ms. “Dumb Dumb” didn’t even see it coming.  If she has always been an Obama supporter then why make that stupid ass verse knowing you have followers or you like to call them “Barbs”.  So she is either dumb, or dumb and Obama calmly mind f*cked her.