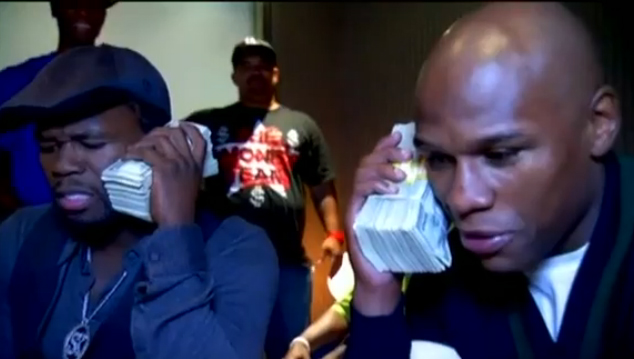 When Mayweather was released from prison, he and 50 Cent were set to take over the boxing world.  In fact they traded insults with Oscar De La Hoya as they announced their new partnership.  The new movement was called, TMT  (The Money Team) Promotions.  The company was going to rival Oscar and become a major player in the world of boxing.

Well just over 2 months has gone by and 50 has announced that he is no longer working with Mayweather, in fact he is working with his biggest rival, Manny Pacquiao.

Despite the epic ongoing feud, between Floyd and Manny, 50 thought all three could work together but Floyd didn’t share in that vision.

WHY DID 50 CENT STOP WORKING WITH FLOYD?

Simple.  50 said that Floyd lacked motivation. When it comes to matters of money, 50 is always honest and this was no different.  During a recent interview with Power 105.1, “Fif” was quite frank about the situation,

“I look at Floyd like he’s my younger brother… He earns so much that he just spends it, he just run (sic) around spend it doing what he want (sic), so there’s no urgency to anything.”

The big question in all of this, “Will this end the Bromance between 50 Cent and Floyd Mayweather?”

50 doesn’t seem to think so.  When asked the question directly, he replied,

“I don’t think so. I think he’ll go, ‘I wish him luck.’ It’s not like I wasn’t in communication with him, I texted him and told him everything.”

We will see soon enough.  Floyd is not one to keep his thoughts quiet.
[more…]