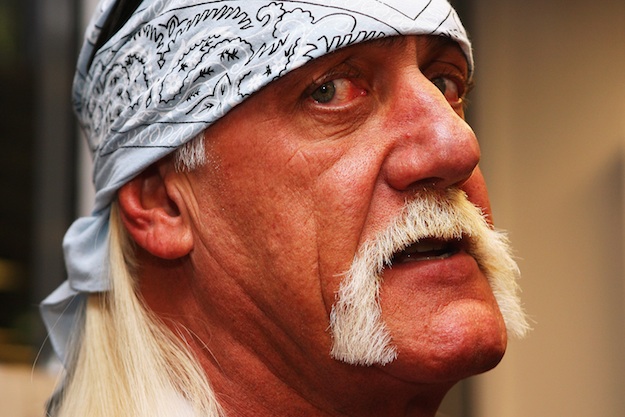 The Hulk Hogan Sex Tape – Read and Then Watch [video]

Before you click on the link – don’t you want to know what you are about to see?  This is definitely no Ray J and Kim K, but it’s an aging 59 year old Hulk Hogan “running wild” all over some chick.

Not even really that.

Gawker edited the full movie which runs almost 30 minutes.  The tape was leaked last year when it was rumored that Hulk Hogan had sex with his best friend Bubba the Love Sponge’s, (who is a famous DJ) wife.

This appears to be the tape, and the woman shown very well could be the now ex-wife of Bubba, who goes by the name Heather Clem.  There appears to be a third person that leaves the room when the action starts and from some of the conversation that was had, it can be assumed that mystery man is Bubba, and he gave the Hulkster permission to smash his wife.

“You guys do your thing, I’ll be in the office if you need me.”

Keep in mind, it’s not p0rn but a sex video.  There is a big difference . This looks more like what you and I do versus a GQ pizza guy delivering “Stromboli’s” to a under-sexed housewife.  In the edited down version you can see the Hulkster’s cell phone ringing [more…]as he is expecting a call from his son Nick. When he sees the number he says,

I guess that means he’s not answering.  You can see him get a little “Hulk Head” from the chick, and there are a few shots of the Hulkster’s manhood.  Gawker describes it as the size of a kids lunchbox thermos, I think that’s being a little generous.

You see her ride Hogan, he gets dressed and bounces.  It’s just like that. The video is black and white and a tad bit blurry but you can see what you need to see including some aging old, untanned Hulkster butt tan lines and an aerial view of a bandana less hairline.  Hogan looks every bit of his 59 years of age in some shots.

Don’t be fooled by the pick below – you click that it will take you to the real video – which is for sure NSFW.

Gawker also does a great job of giving you explicit details in a colorful write up from the perspective of someone who’s seen the entire film.  My attempt here pales in comparison.  However – I don’t claim to be a writer, just a guy with a blog that likes to talk Smack!

Click Below to watch the Video….now I bring you…HULK A MANIA RUNNING WILD!