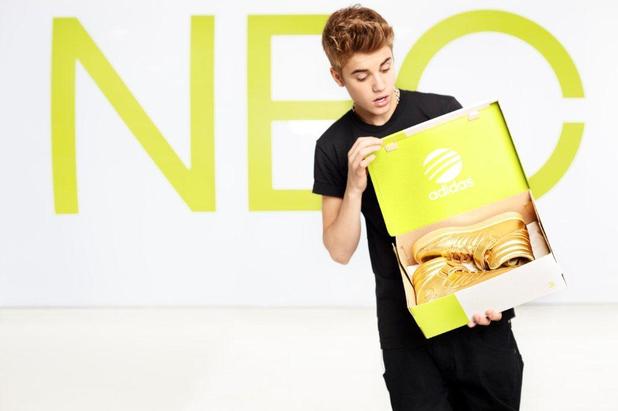 Add another endorsement to the Bieb’s list of money making ventures.  Justin is the new face of Adidas.  A new commercial hit the web today which featured Justin in an ad for the new Adidas NEO label.  Bieber promoted the clip by announcing it to his 29 million twitter followers.

Big news! I'm now working with @adidasNEOlabel . Find my gold shoes online and u could bring them to me in person!! http://t.co/vOGOamwa

Don’t let the Youtube counter fool y ou, it says 303 views but there are over 1200 likes.  Youtube freezes the views the first day to verify traffic quantities so you can assume that number to be somewhere near 100,000.

As part of the promotion, for the next 5 weeks a Justin Bieber fan can use clues that will be released via the NEO Facebook app to find pictures online of the gold Adidas that he has been wearing on tour. Once the pic is located there will also be a special code; fans enter that code on the fan page to be eligible to win an all expense paid trip to meet Justin in Miami.

The spot and the promotion sucks and Bieber is still using the word SWAG (which drives me nutz) but when you have 29 Million Beliebers that you can tweet to at any time, your ad really doesn’t have to be that good now does it?  The singer already has his own fragrance collection and plans to launch his own clothing line so the Adidas deal just makes sense.  Bieber has had back to back years earning over $50 million dollars and has a networth approximated at $110 Million.

I now bring you…Justin and the Gold Kicks