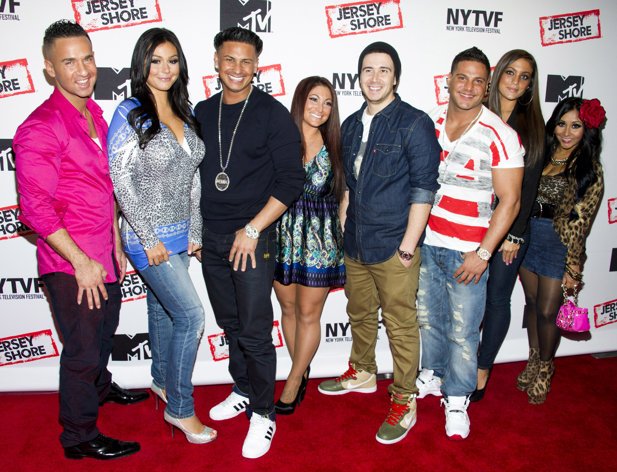 The Jersey Shore crew is stepping up to help out the very place that made them famous.  They have signed on to support MTV’s telethon in a one hour live special called, “Restore the Shore”.  Funds raised will be used to help those who have been affected by Hurricane Sandy and assist in the rebuilding efforts of the Jersey Shore.

Seaside Heights, the place where “The Jersey Shore” was filmed was all but wiped out.  The beach landscape was altered severely and nearby homes was swept off their foundations.  Entire sections of the boardwalk were ripped out changing the coastline dramatically.

MTV will be teaming up with Architecture for Humanity, a charitable organization that offers architecture services for communities after natural disasters.  They will help design and rebuild the Jersey Shore to be even better than before.

Snooki was excited to give back, and shared her excitement with her twitter followers,

“We are doing a live telethon to raise money to help rebuild,”

We are doing a live telethon to raise money to help rebuild. “@mandilowell: @snooki How can we help rebuild by watching MTV, Snooki??”

She also used her social media power to conjure up donations.

The telethon is planned to air one week from Thursday on November 15th.

Snooki and JWow still have a show on MTV and The Pauly D show hasn’t been cancelled as of yet and the last season of The Jersey Shore is being shown right now.  Being part of the telethon is the least the Jersey Shore crew can do,  after all if it wasn’t for MTV and Seaside heights, Snooki would probably be asking me if I had any coupons today.

THE NET WORTH’S OF THE JERSEY SHORE CAST

With averaging $150,000 per episode for this final season, everyone’s net worth of the cast of the Jersey Shore has broken the $1 million mark.