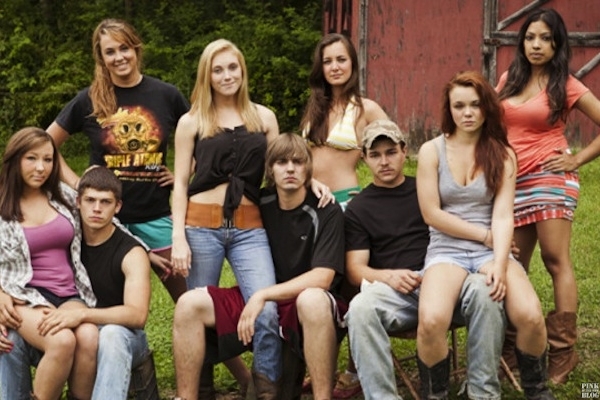 I’m guilty. Honestly I was like “WTF” at first but as the extended trailer for Buckwild plays on and on, it actually gets pretty interesting.  I think MTV might actually have something here.  Their formula for picking talentless nobodies and sticking cameras in their face and paying them very little (at first) looks like it still works.

Buckwild is a show that follows the residents of Sissonville, West Virginia.  Yes, home of the redneck.  That’s where all those West Virginia jokes are born out of tales everyday life in this town.

They match the Jersey and Long Island accents with Appalachian accents sometimes so thick we need subtitles.

However, there is no glitz and glamour.  This is Honey Boo Boo meets the Jersey Shore.  Snooki showed every girl that they can be fabulous.  These hillbillies show every girl that it’s perfectly ok to be exactly how you are and every guy that brushing your teeth is optional.

In the trailer you can see their high school prom king, Shane proudly saying,

‘I don’t have no phone, Facebook… none of that internet stuff.’

Watching this trailer I’m surprised they have indoor plumbing and running water.

Don’t be fooled, MTV revealed that some of the cast members are college graduates just hanging out before embarking on their real careers.  Of course they didn’t’ say what college they graduated from.

‘Our motto round here is: “Whatever happens, happens.”‘

And now the extended trailer of BuckWild!