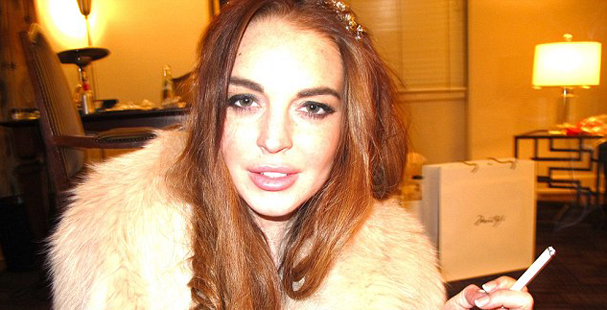 The government has seized Lindsay Lohan’s bank accounts. Next they will Seize Her!

If she was Laticia Lohan, her ass would have been locked up 2 cocaine habits ago. Uncle Sam got fed up with Lindsay not making good on her debt and decided to seize all of her bank accounts.

Lindsay owed the IRS $233,904 in unpaid federal taxes for 2009 and 2011. She was supposedly working on paying the government over time however, the government decided she wasn’t working fast enough. Uncles Sam reads the blogs. He knows that she made $2 million this year for her movie projects which included the critically bashed “Liz & Dick” and a cameo with Charlie Sheen in Scary Movie 5.

Charlie Sheen felt bad her and broke her off $100 Stacks to help ease her debt. The government knew that as well. It was reported on every entertainment website.

Lindsay’s own friends are running out of patience as well. Her assistant, Gavin Doyle, the person who bailed her out of jail after last Thursday’s fight tweeted,

“@lindsaylohan after bailing you out last night I HOPE and PRAY you get the help you so desperately need,”

Even a cat has 9 lives and I think Lindsay is on number 12.

Lidnsay’s Dad weighed in on the situation, saying that he is very concerned. He told the Daily news that she made more than $100,000 to promote the new Mr. Pink Energy drink. Michael Lohan said that he knows his daughter is drinking again,

“I care about one thing: Lindsay’s life, I know she’s drinking again, and that’s bad enough. What happens if she goes to jail? They don’t detox you in jail. I want her in rehab. I wanted her in rehab six months ago.”

The starlet is due in court Dec. 12 for an arraignment on three misdemeanor charges related to her June car crash and will need her money if she has to post bond. She could be facing 245 days in jail. I say book her ass and call it the day. If Paris Hilton can do time, so can Lilo. She’s a wrap!