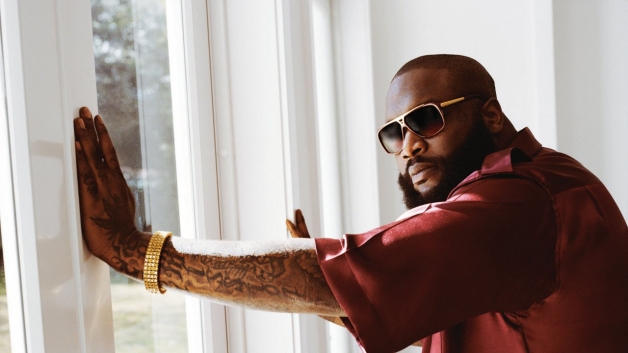 The Boss Rick Ross was supposed to continue his Maybach Music Group tour through December 16th but has since cancelled the final leg.

Rumor has it, that he cancelled because of numerous death threats that he received from a gang called “Gangster Disciples” , or as you will see on Youtube, just simply, “GD’s”.  The gang is upset because Rick Ross’ uses the name Larry Hoover in his song “B.M.F.”  The song starts out,

Ross reportedly got a pass from the gang after agreeing to speak at some functions that the Disciples were sponsoring.  Not only didn’t Ross follow through, he also provided them with false contact information.  (Wouldn’t you?)  To further add fuel to the fire,  on the cover of his latest mixtape, he put his face on the six point star which is also the Gang’s unofficial Logo.  They took that as a sure sign of disrespect. In response the Disciples released youtube videos (I guess that’s what thugs do these days), in which they threaten Rick Ross, and tell him not to do shows in their areas.

Rumor has it, that is why the last leg of the tour was cancelled.  Ross and his team say that is not the case.  Ross released the following statement in response to his fans, regarding the cancelled dates,

“I want to apologize to all of my fans who I missed performing for due to the cancellations and want to let them know that I will get back to their cities. I enjoyed my experience with my little bros Wale and Meek Mill and I’m ready to get back in the studio to make good music.”

Ross’ reps say that everything was cancelled due to the “apparent lack of organization and communication on the part of the tour promoter,”

This could be the case, however, this would also tie right back to the Gangster Disciples and their threats.  They were said to have threatened the promoters as well.

If I was the tour promoter and received threats to myself and family, there would be a lack of communication as well.  Or just a two word communication, “TOUR CANCELLED”

I fully support Ross decision to lay low.  Not that he should be scared of these guys, but……..he should be scared of these guys.  It’s the knuckle heads that you should watch.  Anyone foolish enough to make death threats on Youtube, is also foolish enough to get a gun and shoot.  Ross and his camp were smart to take the threats seriously.  I know there is some backlash calling “The Boss” a chump, but it’s better to be a live chicken did a dead duck.