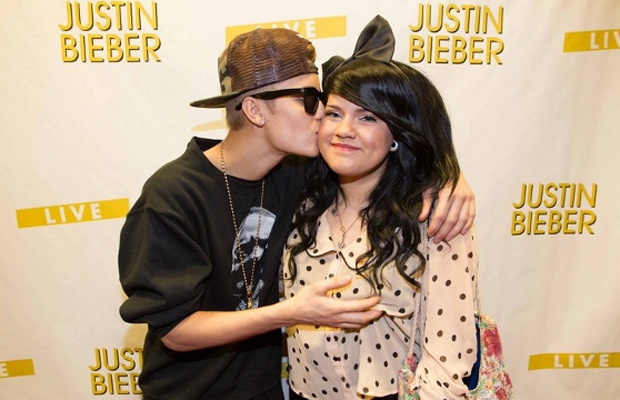 Bieber Breast Grab Victim Revealed and Says Justin Is Innocent and her Breast is Just Lucky!

I love how everyone is trying to make Justin Bieber appear like he’s some kind of bad boy over this picture.  Yes he smoked a blunt but blatantly squeezing the rack of this girl is not part of Bieber’s DNA.

The picture was taken during a meet in greet in Miami.

The girl in the picture has come forward on twitter, identified as JocelynnBieber,  She is getting her taste of social media at its finest.  Most Bieber fans are telling her how lucky she is and others as can be imagined are finding her at fault for the negative publicity.  Beliebers can be brutal!

Jocelynn explained how the kiss on the cheek and the boob grab actually went down,

After a few million billion tweets about her asking JB to Boob grab Jocelynn explained again,

Let me clear this up for people who can't read, NO I did NOT ask Justin to touch my boobs

Then most tweets came in telling her how lucky she is.

Bieber was there to film a new concert film.  The entire outing in Miami was flagged with controversy.  He cancelled part of the filming saying that he was not feeling well, but was then seen backstage riding around on a scooter.  Then his concert at American Airlines Arena started three hours late as Bieber was running behind schedule.

To me both of those offenses are far worse than grabbing a breast.