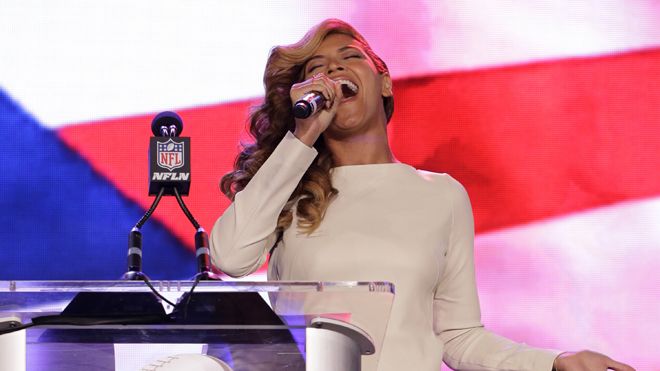 Beyonce Breaks her Silence about the anthem but Not Before Blowing the Press Away with a Live Rendition. [video]

I’m not sure if we’ve ever seen the press conference from the Super Bowl half time performer but in this case the world was waiting to hear from Beyonce.  They wanted an explanation regarding her un-singing of the anthem during inauguration day and she did not disappoint.  She had answers.

Before any questions were answered, Beyonce appeared in a white dress, looking GOOD! She grabbed the mic and tore the house down with a live performance of the anthem.  That basically addressed any questions about her singing ability.

After she finished she calmly said

But of course there were.  There were many.  She answered the inevitable first question of “Why” she used a back track.  Here response was simply,

“I am a perfectionist,”

“One thing about me, I practice until my feet bleed. I did not have time to rehearse with the orchestra. It was a live television show. It was a very important emotional show for me, one of my proudest moments.”

“Due to the weather, due to the delay, due to no proper sound check, I did not feel comfortable taking a risk,”

“It was about the President [Barack Obama], the Inauguration. I wanted to make him and my country proud, so I decided to sing along to my pre-recorded track, which is very common in the music industry. I’m very proud of my performance.”

When asked if she would be performing live, she also had a simple answer,

You can watch the Q&A portion of her Press Conference below.  If you weren’t excited about her performing before, you will be now.