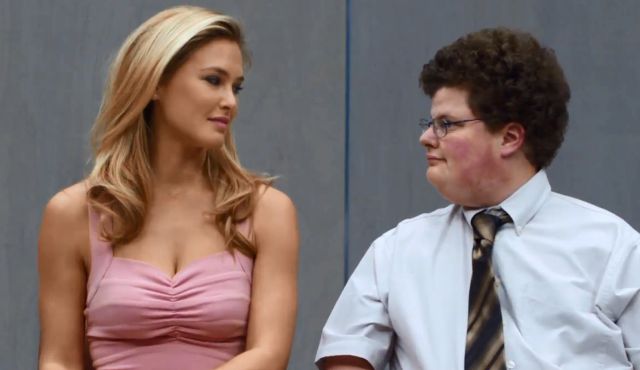 The original commercial is below, but this will be cut and edited for the Superbowl.  The network thought it to be too risqué for Primetime.

That lucky nerd you see is Jesse Heiman.  The 34 year old looks and often plays high school and college aged nerd and geek roles.  Most recently he can be seen in The Amazing Spiderman and The Social Network.  That persona has landed him one of the best jobs he’s had in a long time.

Heiman was tapped to do the sexy Go Daddy ad with Bar Refaeli with the theme “Smart Meets Sexy”.  Go Daddy did a helluva job going to the extremes for each example.

The two share and intimate kiss during the commercial; a kiss that took 65 takes to get just right.  Each take was 10 seconds long.  That is 650 seconds or 10 minutes of kissing Bar Refael…but who’s counting.

In 2011 Heiman was voted World’s Greatest Extra and now we are voting him” The Worlds Luckiest Nerd”.  Here is the full uncut commercial.  I have to admit, it’s sort of hard to watch.  I have never been a fan of nerd p0rn. We now bring you: GODADDY KISS COMMERCIAL UNCUT