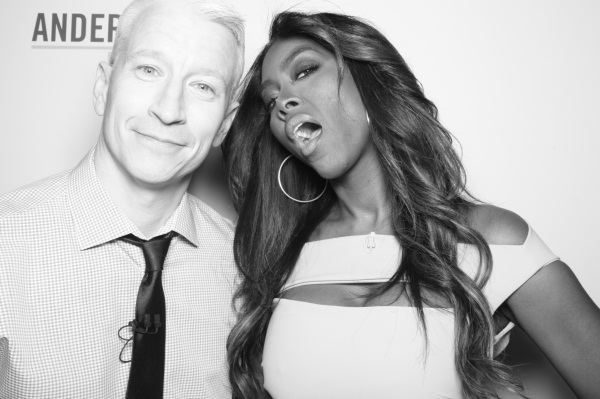 After Phaedra and Apollo dropped Kenya from the “Donkey Booty” project, the 42 year old former Miss USA winner joked about creating her own DVD. …..Butt she wasn’t joking. (Pun Intended).

Kenya is set to launch her DVD and it’s called Booty Boot Camp, and she is doing all that she can to make sure that it’s as successful if not more successful than Phaedra and Apollo’s efforts.

Moore was able to get an appearance on Anderson Live, giving her soon to be released, DVD some national exposure. During the show Anderson showed a clip of Kenya doing what she described as the Booty Pop!

Also on the show, Kenya addressed Phaedra’s accusations that Kenya’s butt is fake! During an interview with In Touch, Phaedra made the comment,

‘If you’re gonna sell a video talking about bottoms, you need to have one that’s homegrown, ‘I’ve never been altered by plastic surgery. My butt is really my butt. [Kenya’s] is full of silicone!’

When Anderson asked Kenya about the accusations, she attempted to rise above the gossip saying that she is on another level. Kenya explained,

‘You know we’re on a show, we’re both doing something pretty positive, helping people to workout, and she takes it to a kind of gutter level.’ She also claims that her workout will give you a Stallion Booty, which apparently is much better than a Donkey! According to Kenya,

‘A donkey is basically a service animal it’s short it’s stout it’s sad it’s out of shape, it’s broke down. ‘Who wants to look like a donkey when they can look like a stallion?’

Kenya’s DVD is scheduled to hit shelves on March 5th. Phaedra has had Donkey Booty releases since December and it’s been a big seller on Amazon.

AND NOW….THE BOOTY….
Here is Anderson Cooper watching a clip of Kenya doing her workout. He looks impressed but hopefully Kenya knows….that he’s not interested.