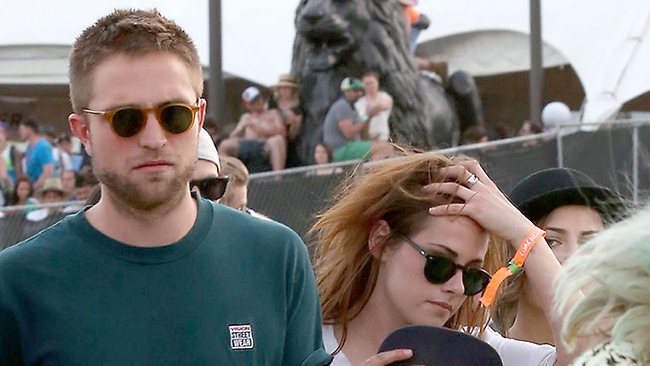 Robert Pattinson and Kristen Stewart Over?

Twilight fans cover your eyes because you might not like the news in this article. As most everyone knows, Kristen Stewart cheated on Robert Pattinson with a married man last year. Robert broke up with Kristen after she publicly apologized to him. It was an embarrassing and awkward situation for everyone involved, and it seemed like Robert and Kristen were over for good. However, Kristen must give some really great head because Robert took her back a short time later.

Since then, they have been spotted kissing each other , hugging, laughing and just last month they were pictured holding hands at Coachella. Things seemed to be back on track for the lovable vampires, but new reports are coming out that claim Robert and Kristen are no longer an item. According to the reports, it appears like the trouble started sometime earlier this month when Robert returned from New York to L.A. The first sign of “real trouble” was when Kristen Stewart was no where to be found on May 13, which most Twilight fans know is Robert’s birthday. He turned 27 this month, but he didn’t celebrate his birthday with Kristen. A source told PEOPLE magazine,

“It was very strange that they didn’t celebrate Rob’s birthday together. He had friends over at his house, but Kristen was not part of the celebration. For the past few days, they have not spent any time together. They again went from spending every second together, to spending more time apart at their separate houses. Kristen has been in a terrible mood, and it was obvious that things were not great with Rob.”

The source also claims that Kristen is behaving exactly like she did the last time they broke up. Not coming out of her house, and surrounding herself with very close friends. Another source talked with Us Weekly and claims that the couple had been fighting a lot, and that their was a lot of stress on their relationship. Kristen and Robert have yet to comment on the rumors, but we’ll keep you updated if they do.

Sorry to disappoint all you Twilight fans out there! At least you can still relive their intense passion in the movies, right? They can’t take that away from you, it’s on film! You can watch that awkward love scene again and again. Personally, I am more of a Jacob fan myself, I think they would have made a better couple. Their chemistry was just so great, you know? It really translated well on the big screen.

Oh, who am I kidding? I don’t freaking care who she ended up with. Besides, didn’t Jacob end up with her daughter, or something? Because that is not freaking creepy or anything. “I’m sorry, Jacob. I just can’t be with you…but I’ll give you my daughter as a consolation prize!” Does that seem strange to anybody else?