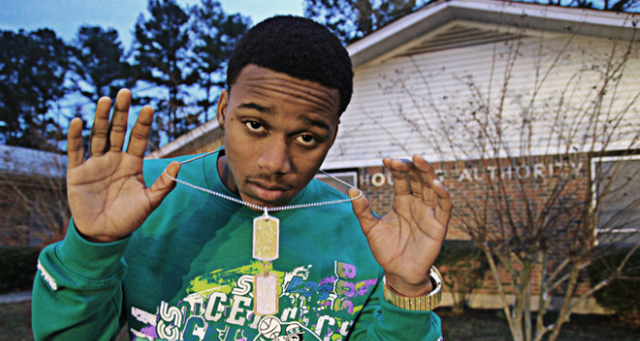 Lil Snupe was an 18-year-old rapper who was recently signed by Meek Mill’s Dreamchasers. His career in the hip-hop game looked bright, after all he was signed on the spot last year after he shared his demo with Meek at a tour stop.

Sadly, the 18-year-old will never get a chance to prove his talent to the world. It’s now being reported that the rapper was shot to death outside of an apartment building in Louisiana early Thursday morning. According to a statement by the local police department, officers responded to the shooting call at around 4 in the morning. When they arrived at the scene, they found Lil Snupe who appeared to be dead with two gunshot wounds to his torso area.

He was pronounced dead at the scene. The paramedics did try to revive the 18-year-old, but they were unsuccessful in their attempts. No one knows what the motive behind the shooting was, but we’re sure more details will emerge soon. The police department did announce that they were looking for a person of interest.

“R.I.P. @LilSnupe tears coming dn my eyes snupe is a amazing friend artist I cnt believe ths! sending my (prayers) 2 his family and his DCR family!” DJ Khaled tweeted after finding out about the shooting. Meek, one of the first people to discover Lil Snupe also sent out a tweet,

“R.I.P 2 my lil f–ing n–ga #lilsnupe I tried everything in my power 2 get that kid out of the streets!”

He has since deleted that tweet and has replaced it with a simple, “R.I.P” tweet. Apparently, he had second thoughts about sharing his frustration on Twitter. It is interesting, though. He must feel pretty upset and angry about the whole thing if it was indeed a “street” related shooting. It seems like he really did a lot for Lil Snupe, and he wouldn’t have done it all if he didn’t think the kid had great potential.

“He was in a van, they was finna pull off. And I went and knocked on the van, on the window. They let the window down, grabbed the mixtape and it was like 10 minutes later, 20 minutes later they called me.”

It’s so sad when young people die like this. It’s just senseless. He just turned 18, he hadn’t even had the chance to live yet.