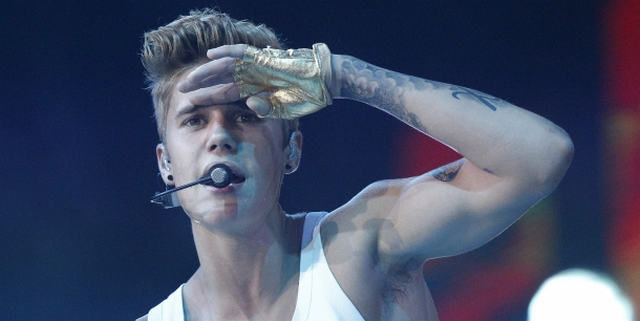 Justin Bieber has officially moved on from Selena Gomez. He now has eyes for a 22-year-old Hooters waitress who has dreams of becoming a model. Bieber and the new girl Jordan Ozuna were apparently getting very cozy together at that Las Vegas Indoor Skydiving place, you know, the one he screwed out of $1600.

Anyway, as you can (kind of) see in the photo down below. It looks like Justin Bieber has his head on Jordan’s lap. It’s pretty clear from that photo that either they like each other, or Justin had a tummy ache and needed some comfort from an older woman. Who knows. But if he is indeed dating this girl, he might want to ask her husband for permission. According to Jordan’s estranged mother-in-law, Jordan is still married to a dude she met in high school.

“She’s still married.” Kim Ozuna told Celebuzz. She says that her son and Jordan married right after completing high school. “They’ve been separated a good year. They were very young when they got married. They’ll figure it out on their own. They’re probably in the process of getting divorced.”

Apparently, Jordan’s husband is currently serving in the Coast Guard. I wonder what he would think about his “wife” dating Justin Bieber? He’s probably not happy about that. It’s kind of like when a girl breaks up with you and becomes a lesbian. Justin Bieber is like 75% lady, so basically it’s the same type of thing.