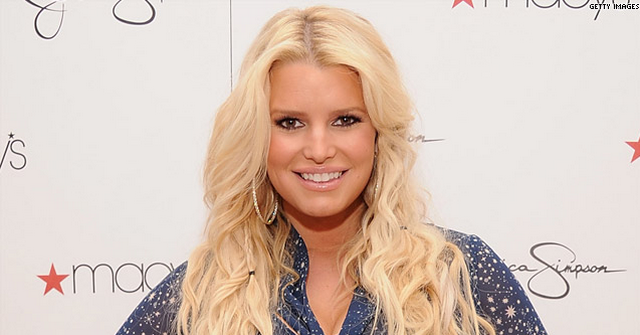 Jessica Simpson picked a bad time to have her baby. I mean, just a couple of weeks after Kim had her baby? You know she is not getting near as much attention as Kim is. No one is offering millions of dollars for baby pictures of Simpson’s new baby.

However, we like to give everyone some time in the spotlight here at tvsmacktalk, so we’re talking all about Jessica Simpson’s new baby boy today. The 32-year-old entertainer gave birth to her second child yesterday, June 30.

A rep for Jessica told Us Weekly the following…

“Ace Knute Johnson has arrived! Mom and baby are doing great. Jessica, Eric and Maxwell are thrilled to welcome the new addition to their family.”

“Ace” might not be as bad as North West, but what is up with that middle name? Apparently, it is pronounced as “ka-nute” which just sounds strange to me. Anyway, the new baby was delivered just 14 months after Jessica and Eric had their first child together, Maxwell Drew. I guess Jessica and Eric wasted no time in the bedroom, huh?

She did joke with Ellen about that quick turnaround, “Apparently protection was just thrown out the window. We’re happy, (but) we were definitely extremely shocked.” she told Ellen. Jessica also revealed that she was not eating as poorly during this pregnancy. She said she stuck to her Weight Watchers diet for the most part during this pregnancy, so hopefully it won’t be too hard to shed off that extra weight this time around.