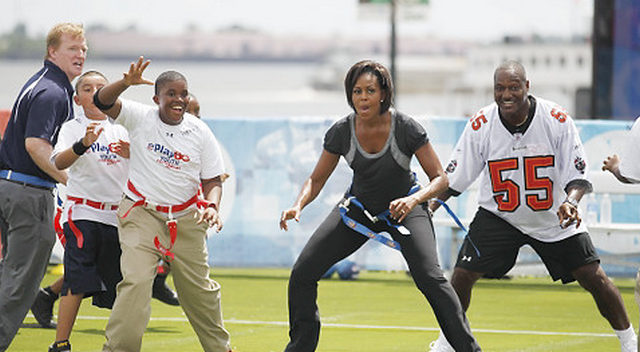 The First Lady is joining the hip hop world by releasing a 19-song hip hop album. It’s all for a good cause, of course.

As most of you know, Michelle Obama has been trying to fight childhood obesity for years now. She’s done several interviews on the subject, made several speeches and has appeared on multiple kid networks to educate children about healthy eating.

And now she is trying to educate all those unhealthy little brats out there by releasing a healthy eating hip hop album. Sadly, Michelle doesn’t actual sing or rap on the album, but she has recruited several recording artists to help her with it.

Jordin Sparks, Doug E. Fresh, Ariana Grande, Travis Barker and several other artists will be on the album. The album is titled, “Songs for a Healthier America” and the first single, “Everybody” has already been released.

You can watch the music video for the song down below, and I am telling you that you should watch this video. Even if you’re not overweight, you need to watch this video. Why? Because Dr. Oz raps and dances awkwardly throughout the video.

I don’t know about you all, but I sure could use a few carrot sticks right about now.

…with a cup full of ranch dressing.