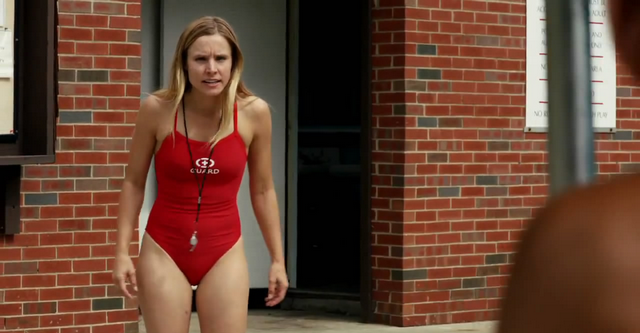 Kristen Bell stars in the new indie film, “The Lifeguard.” The movie is about a woman who is having a life crisis as she turns 30. She returns back home and takes a job at the local community swimming pool where she begins to have an affair with a teenage boy.

The film just debuted at the Sundance Film Festival, and is set to be released in theaters tomorrow. The movie hasn’t received the best of reviews, but Kristen Bell sure is doing a great job of selling it.

Kristen just recently sat down for an interview with Julie Miller from Vanity Fair, and she revealed just how intimate the sex scene with her co-star David Lambert was,

“We really shook hands and said, ‘Let’s make this graphic and real.’ Even prior to rolling, I think I just grabbed his hands and put them all over my chest and said, ‘This is it. Don’t be shy. Do what you do. I won’t be uncomfortable. I trust you.’”

David Lambert was just 19-years-old at the time, so you can just imagine how much of a thrill that probably was for him. However, Kristen states that he was very professional about the whole thing,

“Going into a scene that intimate as a female, you couldn’t ask for a better partner. There’s a lot of choreography going into the camera work and making sure you can’t see the, like, one inch of fabric that is actually keeping you from having sex.”

Well, I don’t know about you all, but I kind of want to see the movie now! Or at least that part of the movie, I am sure it has leaked online somewhere. I’ll look for it later during my “alone time.”

Anyway, I imagine it was fairly easy for Kristen to control her emotions during the sex scene. We all know there is only one thing that gets Kristen Bell all hot and bothered…