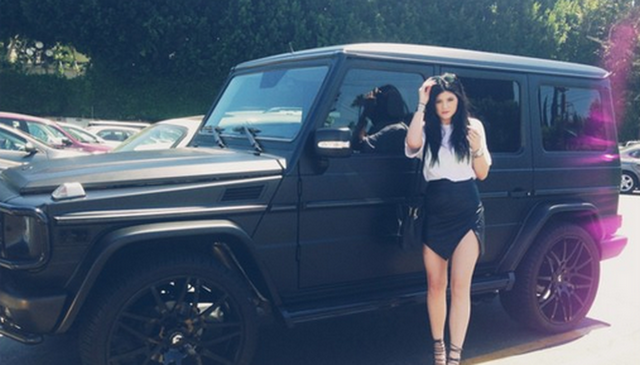 Why is it a really bad idea to give a 16-year-old a $110,000 car? Because they will crash it! They always crash their first car, no matter what.

Kylie Jenner is no different and she found out the hard way this past Wednesday in California. She was driving her new Mercedes G-Class SUV around town when she accidentally slammed her expensive SUV right into a Toyota. The impact of the crash caused the Toyota to hit another SUV that was in front of them.

Thankfully, no one was seriously injured in the three-car crash and according to TMZ, Kylie jumped out of her car and immediately apologized to the other drivers. Everyone exchanged information and then Kylie drove off to probably go buy another car.

She originally received the expensive SUV (see in the photo down below) back in June. However, she was not able to drive unsupervised in it until August 10 when she turned 16-years-old. I understand her family has loads of money and $110,000 is probably nothing to them, but does a 16-year-old really need that expensive of a car? I mean, what have they really done to deserve it? I’m not saying they have to drive some broken down piece of sh-t like the rest of us, but a $110,000 car? Really?

These kids probably have no idea how lucky they are.