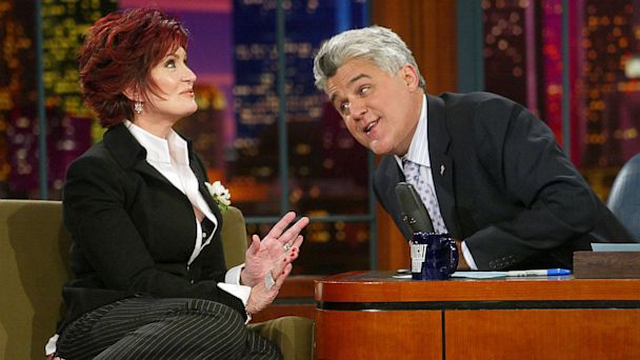 Sharon Osbourne Admits She Had A Fling With Jay Leno

Sharon Osbourne has never been shy about sharing very intimate details of her life. She is an open book and sometimes we wish that damn book would stay closed.

The 60-year-old co-host of, ‘The Talk’ shared a little too much information on the show earlier this week when she admitted she had a fling with Jay Leno. Sharon’s exact quote was, “flingy wingy” but we shortened it so it wouldn’t sound like they were making paper airplanes together.

After she admitted to having a “flingy wingy” with Jay Leno, Julie Chin…I mean Chen. Sorry, every time I write about Jay Leno all I can think about is his chin. Anyway, Julie Chen tried her best to get Sharon to elaborate on the comment, asking her, “You say a ‘flingy wingy’ — you mean you had sex with Jay Leno?”

Sharon never answered that question specifically, but she did reveal some more details about the fling. She says it happened when she was just 25-years-old. She claims it all started with a prank call and took off from there.

“One thing led to another. He came to my house and met me, and then we had a little fling. The fling was more fling for me, and not fling enough for him. Because, a couple of months into it, he brought around his real love of his life for me to meet. She was lovely.”

Gross. I don’t want to think about Sharon and Jay Leno having sex, although, it is slightly less frightening than picturing Ozzy having sex with Sharon…or anybody for that matter.