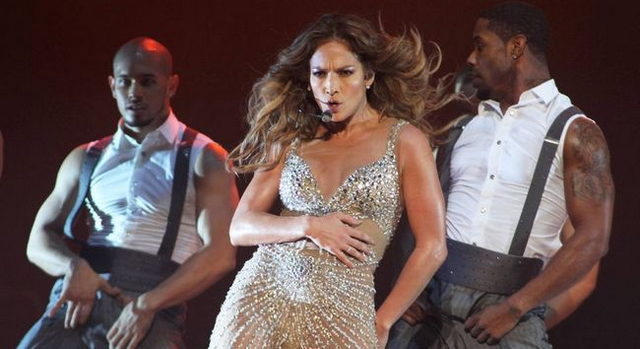 Are Things Over Between Jennifer Lopez and Casper Smart?

As most of you know, Jennifer Lopez separated from her skeleton-like husband Marc Anthony back in 2011. One can only assume she ended things because she got tired of weighing more than her husband did, or maybe she just didn’t like the feeling of his ribs rubbing against her during sex.

Anyway, she has moved on now and has been with Casper Smart for almost two years now. Casper started out just as a backup dancer for Lopez, but things heated up right after she split up with her husband.

As you can see from the photo down below, Casper is certainly an upgrade over Marc Anthony. Not only does he actually have some muscle, but he’s also only 26-years-old. Jennifer Lopez is 44-year-old, so it’s safe to say she has a little cougar action in her. But their once perfect relationship might be in a lot of trouble. According to a report from E! News, the couple might be breaking up very soon.

An insider told the site the following,

“Things are not going well at the moment. They are bickering and it’s clear to people around them that there is an irritation between them at the moment. It’s hot and cold, but more cold than hot right now.”

Another insider claims that Lopez never expected their relationship to last as long as it has. Some claim the only reason it has lasted this long is because Lopez’s kids really love Smart and she doesn’t want to hurt them.

We’ll see what happens. If she does break-up with him, I am available. I might not have incredible dance moves, but I can type really damn fast. And you know what they about people who can type really fast, right?