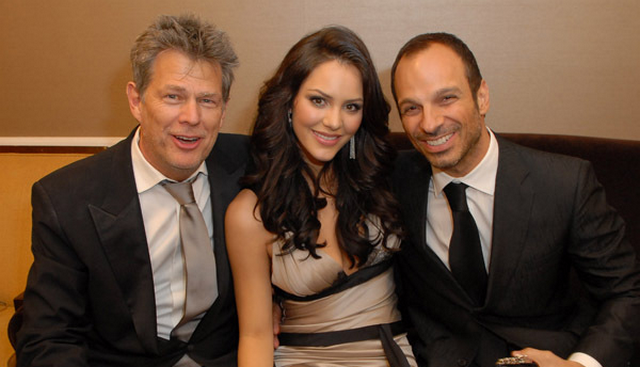 Katharine McPhee was caught making out with ‘Smash’ director, Michael Morris. TMZ caught the two lovebirds making out in public the other day.

Normally, this wouldn’t be considered “breaking news.” However, both McPhee and Morris are married to other people! That’s right, the two people you see below making out in public with each other are both married.

And even worse, Morris is married with children. He’s married to actress Mary McCormack and they have three children together. McPhee is married to a 47-year-old producer by the name of Nick Cokas. So, why would McPhee and Morris be making out with each other in public? Well, sources have told TMZ that McPhee and her husband have been separated for almost six months now, which would certainly explain why she was comfortable making out with some other dude.

We’re not sure if Michael Morris was having any problems with his wife, but you can bet that he is now. He’s been married to his wife for over 10 years, so one can only hope that they were also “separated” at the time of this make out session.

Neither McPhee or Morris has commented on the situation, most likely because they were still too busy tasting what the other one had for dinner the night before.