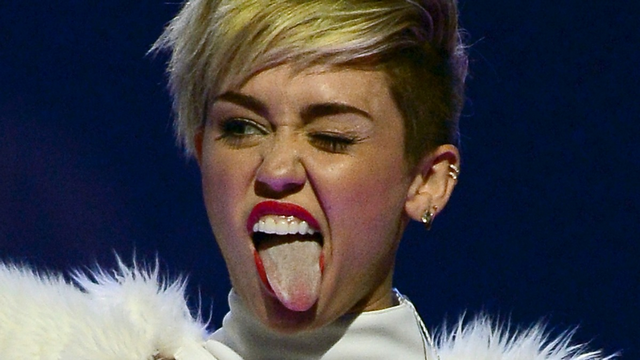 Are you tired of always seeing Miley’s tongue in almost every picture she takes? Well, we are too! Nothing against her tongue, it looks like a perfectly healthy tongue. It’s just after the 100th tongue wagging, it gets a little annoying.

So, why the heck is she always sticking her tongue out? Is she just trying to be annoying? Is she practicing for when it snows? Or is there something more behind it?

Well, the 21-year-old singer talked with Barbara Walters recently for the “10 Most Fascinating Celebrities of 2013″ show and she revealed the real reason she sticks her tongue out for pictures,

That actually sounds like a good reason, right? However, we’re not buying it. She’s been in this business since she was a kid! We’re sure someone has coached her on how to smile for the cameras.

Maybe we’re just being too hard on her. If sticking her tongue out like a maniac makes her feel comfortable, who are we to judge?

At least it’s better than the duck face…