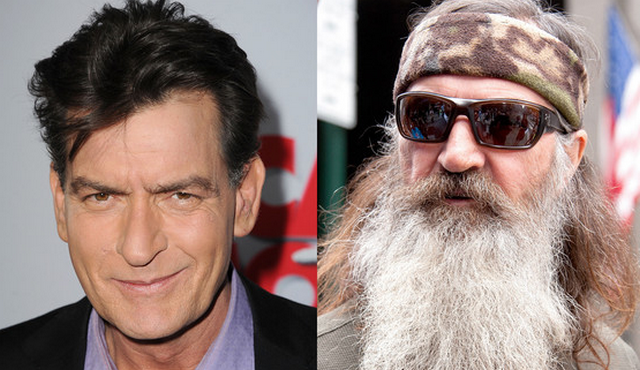 Well, Charlie Sheen decided to throw himself into another battle, because apparently he doesn’t have enough sh-t to worry about right now.

The 48-year-old actor went on his Twitter account this past weekend and decided to write a little letter to Phil Robertson. He included the picture you see down below.

I’m not an animal expert, but it doesn’t look like that is a duck. It looks like Charlie Sheen found some random photo/painting in his house and decided to take a picture of it because it kind of looked similar to a duck.

Anyway, he posted the f–king photo. That’s what we’re trying to tell you. And then he posted the rant you see down below… We’re not sure, but we think he’s mad. He seems a little mad, right? His act is just getting a little old for me. He was once a little amusing, you know? Back when you thought he’d grow out of it and become normal again.

But it’s been a few years now and he’s still the same ol’ Charlie Sheen. It makes you wonder, when is he going to grow up? When is he going to stop putting his coke-filled nose in other people’s business? This is not his war to win, so why even fight in the battle?

Oh, wow. Would you look at that? If you replaced the name “Charlie Sheen” with “Phil Robertson” that little rant of mine would still make sense.