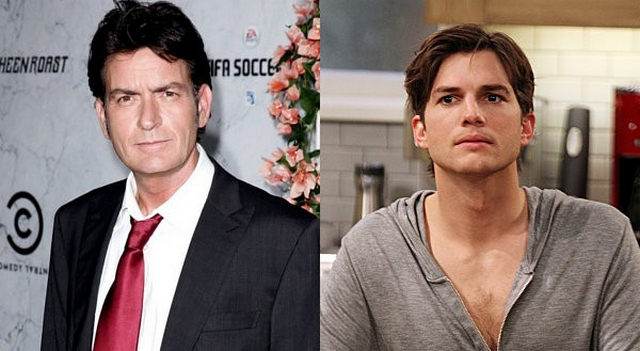 Charlie Sheen must have been bored this past week because he started talking sh-t on his Twitter account again. The 48-year-old annoying piece of confusion first sent out a tweet to his former Two and a Half Men co-star, Jon Cryer.

He tweeted out this message, With this creepy picture attached,

But he didn’t stop there. Just a day after calling Ashton “lame” (GASP!) He tweeted Ashton and told him to quit barfing on his former show. Check it out down below… We’re not sure if anyone would have ever called the show “brilliant”. It’s a sitcom that has ALWAYS gone for cheap laughs. The only thing brilliant about the show is how many people still watch the f–king thing.

Admittedly, the show was “better” when Charlie Sheen was on it, but it’s kind of hard to blame Ashton for vomiting all over the place. I always get sick when I see someone else getting sick, as well.