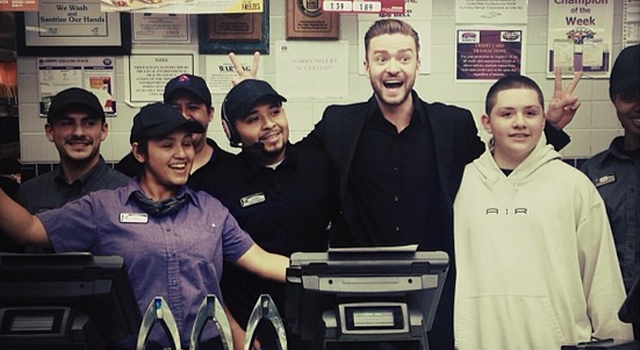 All the girls want him and all the guys want to be him. Justin Timberlake is probably one of the most beloved superstars on the planet right now, and this story is just going to make even more people love him.

On Wednesday, Timberlake had a huge night at the People’s Choice Awards. He won a total of three awards, Favorite R&B Artist, Favorite Male Artist and Favorite Album.

After taking home three major awards, you’d think someone like Justin Timberlake might go to some fancy after-party. However, that is not the case. The 32-year-old singer took his three People’s Choice Awards and went to celebrate with the people.

The people of Taco Bell. Sadly, there was no video of this event, but we have to imagine the conversation went something like this…

Timberlake: Hi, I am Justin Timberlake. I need three tacos, a burrito and some of those cinnamon things that are always too hard to chew.

Timberlake: You guys do accept People’s Choice Awards as a form of payment, right?