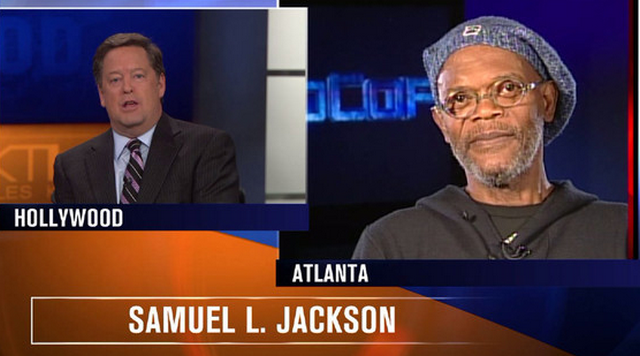 Samuel L. Jackson Goes OFF On Anchor Who Confuses Him With Laurence Fishburne (VIDEO)

Getting the chance to interview a talented actor like Samuel L. Jackson is a big moment for most anchors. They’ll stay up all night, reading their Wikipedia page and watching all of their movies from the past 10 years. It’s exciting to land such a big interview. At least, I am assuming it is. The most talented person I’ve ever interviewed was myself, in the shower.

But KTLA entertainment reporter Sam Rubin had the chance to interview Samuel L. Jackson. The man who somehow managed to make a movie about snakes on a plane watchable. Jackson is the man who absolutely killed it in Pulp Fiction. He’s the man who brought that little something extra to The Matrix…

Oh, sh-t! My bad, that was actually Laurence Fishburne.

Oh, man! Geez, that was awkward. I certainly appreciate how Samuel L. Jackson didn’t let the reporter off the hook, but it was also kind of sad to see someone just sit there and take a beating like that. He didn’t even make an attempt to fight back! He instantly became Jackson’s bitch.

Jackson could have started talking about Rubin’s family, and Rubin would have been fine with it. “Yeah, my son was a mistake. You’re totally right, Mr. Jackson. We should have got an abortion.”

Stand up for yourself, man!