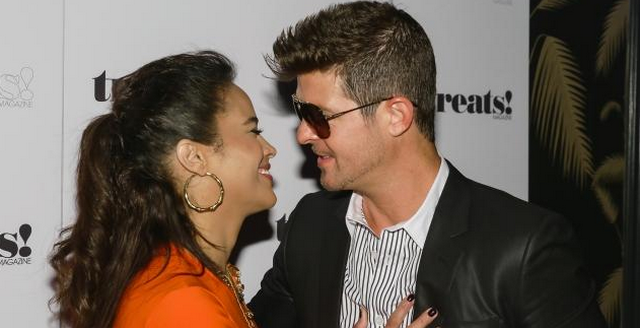 We think it’s safe to say everyone saw this coming. As much as Robin Thicke and Paula Patton tried to claim their marriage was solid, we all knew there was trouble in paradise.

After all, Robin Thicke was caught getting close to several younger women, and we’re not talking about his twerkfest with Miley Cyrus. Who could forget the picture that shows Robin Thicke grabbing the a** of a hot 20-year-old at the VMAs after-party?

He was up in that, right? Hopefully he had some Purell in his pocket. The 20-year-old woman seen in the picture above claimed she was with Robin that entire night. At one point, the 36-year-old singer allegedly said, “I want to get you into bed!”

However, Paula Patton seemed to brush the story off. The married couple laughed off the reports and we’re even seen having some fun in the sun together. But now it looks like they are finally dropping the act. They just announced they were separating after nine years of marriage.

“We will always love each other and be best friends, however, we have mutually decided to separate at this time.”

As you see in the photo above. They did have one child together. Even though this news isn’t exactly surprising, it’s still sad to see another marriage ending. Especially when you consider just how long they have known each other. Paula and Robin met back when he was only 14!

“I knew she was special the night I met her. I was only 14, but she was already the most special girl.”

Too bad you just couldn’t keep your hands away from all that young booty, Thicke.