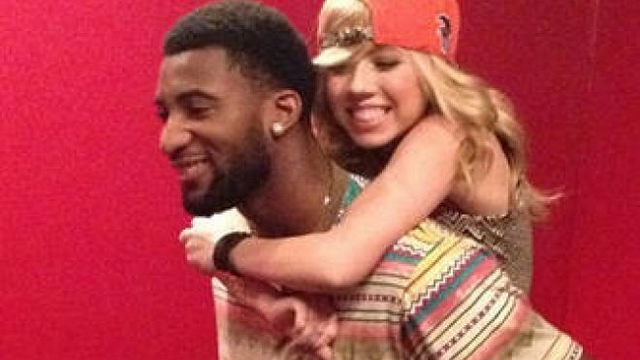 Damn, these Nickelodeon girls don’t play. The girl from iCarly and Sam and Cat is spilling the beans on her awkward relationship with NBA star Andre Drummond.

As some of you may know, Jennette and Andre started going out after meeting on Twitter. Apparently, Drummond had a huge crush on Jennette and would always pick her as his, “Woman Crush Wednesday.” Well, Jennette found out about it and posted a photo of Andre for her, “Man Crush Monday.”

So, as you can see, their relationship was super serious from the start. Anyway, after connecting on Twitter, the two stars met up and went on a few dates. They then had a brief relationship together before Jennette ended things. At first, we just assumed it was because Jennette looked like his adopted child.

However, Jennette McCurdy was on Pete Holmes’ podcast the other day, and she basically took a giant sh-t all over poor Andre.

The 21-year-old actress claims she only agreed to go out with him because he “seemed like a big deal.” And then she talked about how awkward their first kiss was…

“My first kiss with him was after we had gone laser tagging. So I stood on a chair… I sort of went for it. But it wasn’t great. It didn’t go great. No sparks and the mouth… the shapes weren’t right.”

She says that she wanted to end it right there, but she felt obligated to continue the relationship since it had already been announced on Twitter. McCurdy then revealed that Drummond gave her a necklace, got on his knees and officially asked her to be his girlfriend. She laughed and said yes.

A few days later, the actress called up the NBA star and broke up with him over the phone. During her interview on the podcast, she basically laughed the entire time while talking about Drummond. She made him seem like some pathetic little dweeb who couldn’t charm the panties off a broke prostitute. (yes in this scenario the prostitute is wearing panties)

So, what does Drummond say about all this? He told TMZ the following…

“I found [Jennette’s comments] funny. There’s a lot of false info in there, but I’ll be the mature person about the situation and let it die out.”

Good for him. He doesn’t need to get involved in that mess. The poor white girl will always get the sympathy in an argument, even if she’s in the wrong.