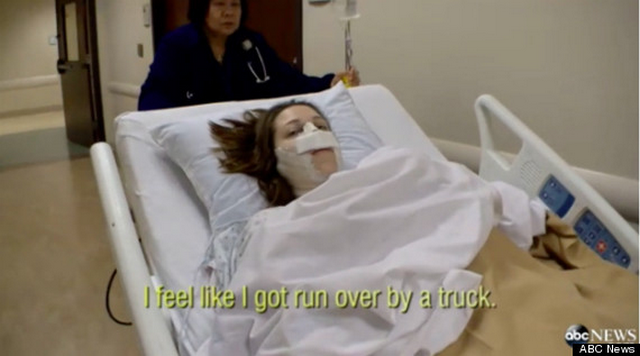 Jennifer Lawrence is a talented actress and a very pretty lady, but would you waste $25,000 to make yourself look like her? Probably not.

But a 30-year-old mother from Texas convinced herself that it would be a good idea. ABC News did a report on 30-year-old Kitty, who trains dogs and takes care of her five-year-old daughter. Her daughter is actually the reason she decided to have the surgery… “The reason why I decided to get surgery is because post having my daughter, I wasn’t quite as comfortable with my body.”

So, instead of working out or just getting a few injections like a normal person. Kitty decided to go all out, and drop $25,000 to look like one of her favorite actresses. The silly surgery took place at First Surgical Hospital in Houston. It was a six hour procedure, which included liposuction, breast augmentation, rhinoplasty and several other small procedures.

Kitty claims she saved up for the money by working hard, and tells ABC she still has plenty of money for her daughter’s college fund. She also revealed she got a discount for sharing her story on TV.

It took several weeks to heal, but after all the swelling went down, Kitty says she is incredibly happy with the results. “Of course I look like Jennifer Lawrence. I thought I had a resemblance to Jennifer Lawrence before my surgery and now I think after, my features are more refined to where they resemble her more.”

I think it’s safe to say that Kitty is delusional. She looks nothing like Jennifer Lawrence! Maybe she should film herself “accidentally” tripping over a carpet. That might help the situation.