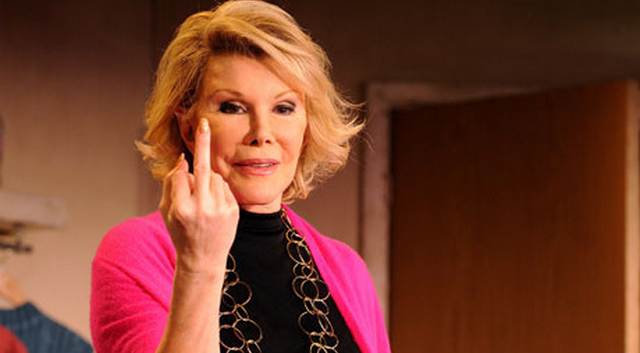 When Is Joan Rivers Going To Die?

I was going to title this post, The Problem With Joan Rivers, but then I thought I would take a page out of her book. Say something really offensive just to get a little bit of attention. It won’t hurt anyone, right? Friends and family of Joan Rivers won’t be hurt when they see this title, right?

Because it’s just a joke! And jokes can’t hurt people, at least that’s what Joan Rivers seems to believe. The 80-year-old retired comedian is making more enemies after she joked about the two women who were held hostage in a basement in Ohio.

It all started on the “Today” show earlier this week. Joan was joking about how small her daughter’s guest room is. “Those women in the basement in Cleveland had more space.” She said while on the show.

This comment offended the two hostage victims. Amanda Berry and Gina DeJesus said they were shocked and disappointed by the hurtful comment.

And instead of apologizing to the two ladies, Joan Rivers decided to continue her barrage of unfunny jokes. She told TMZ the following…

“One of them has a book deal.  Neither are in a psych ward.  They’re ok.  I bet you within 3 years one of them will be on Dancing with the Stars. The TV the guy gave them must not have had SNL.”

Yes, because a book deal totally makes up for years of sexual abuse! If only I had been raped and held hostage for 10 years, then maybe I could also have a book deal!

Joan Rivers doesn’t honestly believe there is nothing wrong with the sh-t that constantly flows out of her mouth. She knows her words hurt people, but she doesn’t care because it brings her all this attention.

Any talent Joan Rivers had went away decades ago. The only reason she is still in the news is because of the controversial stuff she says.

That’s what makes her a horrible person. The fact that she continues to hurt and offend people just to land a new interview. She is a nasty person. I would rather go on a three-day ice fishing trip with Justin Bieber than spend one minute with Joan Rivers.