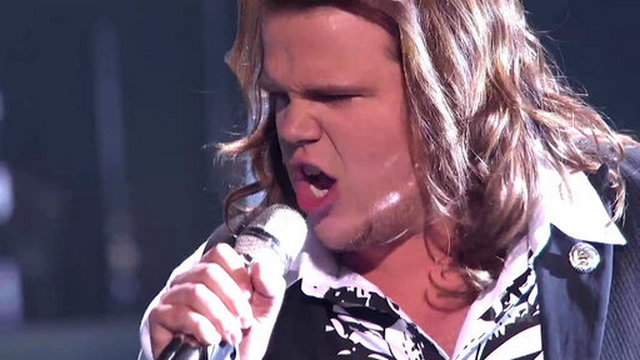 I have watched every single episode of season 13, and that’s why I am not surprised to hear Caleb Johnson was caught saying something that makes him look like a douchebag. The ‘American Idol‘ finalist and wannabe rocker was forced to apologize the other day after he used the “R-word” in an interview.

You can watch the controversial interview down below…

Geez! You can just see the douchiness dripping off him. It’s not just the fact that he called his fans retards. It’s just his whole demeanor. If you have watched the show this season, then I am sure you know what I am talking about. He’s smug, and you can just tell he believes he’s some rock God from planet Freddie Mercury.

Anyway, after Caleb realized he pissed off his incredibly supportive fanbase, he decided to apologize to his fans on his Facebook page.

“For the record that juvenile comment I made in the interview was not directed towards my fans but to the wackos that send hundreds of hate messages a day to me! You guys are amazing and I cannot thank you enough for your support. Sorry if it offended anybody it was the wrong choice of words. Also I greatly appreciate it when you guys give me song suggestions but it gets really overwhelming at the volume it comes in so please understand ! Rock on !:)”

Really? I don’t remember him mentioning “hate messages” in that interview. In fact, if you look closely, you can see disappointment spread across his face when the interviewer mentions he has questions from fans on Twitter.

Caleb needs to learn to appreciate his fans. He works in a business that wouldn’t survive without them, so he better think about changing his attitude.