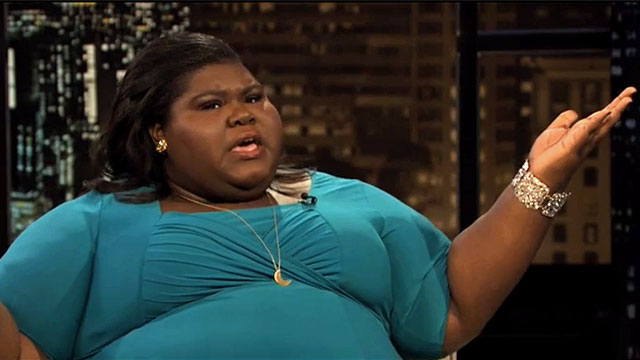 Female Celebrities In Hollywood Will Always Have Their Weight Criticized

It doesn’t matter if you are skinny, normal or overweight. If you are a female in Hollywood, your weight is always going to be criticized. TV reporters, friends, fans and even other (jealous) celebrities will have something to say about it.

Why do I bring this up right now? Because I just saw a perfect example of it this morning. There are two popular posts going around Gossip Town today. Can you guess what people are saying about this photo? Well, if you ignore the perverts asking Naya Rivera to sit on their face while they listen to Pearl Jam. You will probably find a lot of people saying stupid sh-t like this…

As you can see, most of the comments are about her weight. I like being fair, so I will mention there were a few people defending Naya, but they were certainly outnumbered.

Now, let’s do a few frog squats to the other end of the spectrum. Gabourey Sidibe. The 30-year-old actress has had to deal with people asking about her weight for years now. In fact, they have asked her so much that they are beginning to slightly change the question to make it seem less offensive.

Sidibe spoke at the Gloria Awards and Gala last week. She talked about how hurtful it is to always hear the same question.

“Gabourey, how are you so confident?” It’s not easy. It’s hard to get dressed up for award shows and red carpets when I know I will be made fun of because of my weight. There’s always a big chance if I wear purple, I will be compared to Barney. If I wear white, a frozen turkey. And if I wear red, that picture of Kool-Aid that says, “Oh, yeah!” Twitter will blow up with nasty comments about how the recent earthquake was caused by me running to a hot dog cart or something. And “Diet or Die?” [She gives the finger to that] This is what I deal with every time I put on a dress. This is what I deal with every time someone takes a picture of me. Sometimes when I’m being interviewed by a fashion reporter, I can see it in her eyes, “How is she getting away with this? Why is she so confident? How does she deal with that body? Oh my God, I’m going to catch fat!

I always wonder if that’s the first thing they ask Rihanna when they meet her. ‘RiRi! How are you so confident?’ Nope. No. No. But me? They ask me with that same incredulous disbelief every single time. ‘You seem so confident! How is that?'”

Skinny women, overweight women, overweight men, scrawny men…we are all in the same boat. We all have had someone make fun of our weight before, and you know the most messed up thing about it? We are all doing it! It’s just one big circle of sh-t.

Are your jokes about their weight going to help them be healthy?