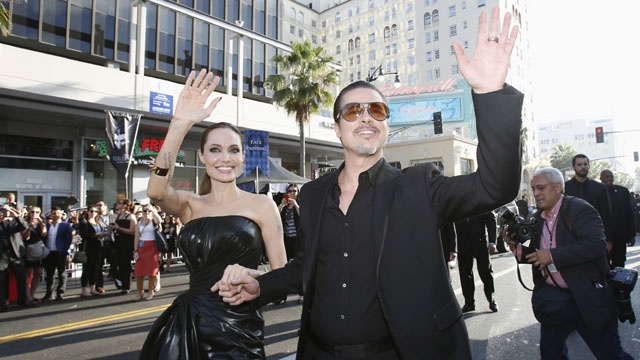 Brad Pitt Attacked On Red Carpet At ‘Maleficent’ Premiere, Find Out Why You Might Recognize His Attacker

The 25-year-old Ukrainian journalist by the name of Vitalii Sediuk has struck again, and this time his “prank” was really just assault.

Brad Pitt was walking down the red carpet with his lovely partner Angelina Jolie, who stars in the new movie Maleficent. During the peaceful walk down the carpet, the 25-year-old professional douchebag jumped over barricades and slapped Pitt in the face.

He was immediately grabbed by security and booked on misdemeanor battery charges. Thankfully, Brad Pitt didn’t suffer any injuries, and he was nice to enough to continue walking down the carpet and sign autographs for fans.

This idiot’s face and name might seem familiar to you. That’s probably because you have heard of his shenanigans before. He’s known for pulling “pranks” on red carpets, but Sediuk doesn’t seem to understand what a prank is. Earlier this month, the journalist shocked everyone at the Cannes Film Festival when he somehow crawled under America Ferrera’s dress.

And this is also the same dude who made Will Smith’s angry side come out back in 2012 when he tried to plant a kiss on his lips. Check out the video down below…

I am all for pranks. I love them, but this dude isn’t pranking people. He’s just going around acting like a jackass, which is unfortunately what most people think a prank is these days.

A prank is supposed to have creativity! It’s supposed to make people laugh. How the f–k is walking up to someone and slapping them in the face a prank?