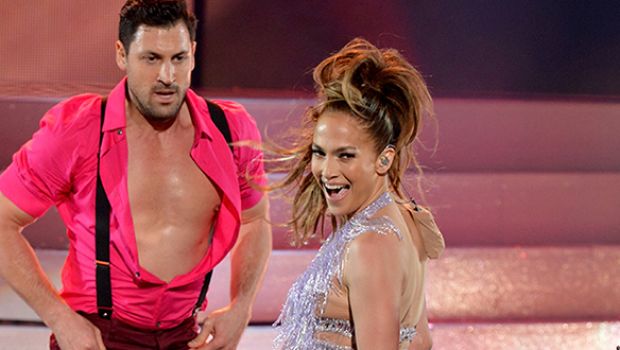 Are Jennifer Lopez and Maksim Chmerkovskiy finally hooking up?

Where there is smoke there is fire.  After the first set of rumors last month, I dismissed the two as an item, but now things are starting to be a little more than coincidental.

Maksim Chmerkovskiy was in Connecticut this weekend at Foxwoods to checkout Jenifer Lopez’s show.  After she performed, the two met up with a group and went dancing at Shrine Nightclub.  The Shrine is a night club that is actually located in Foxwoods and is typically the set for a place you want to bring a date for a nice Asian dinner, get her filled with saki and then the place turns into a night club for some hot bumpin and grinding. Who better to go out dancing with, than the Mirror Ball trophy winner himself.

Sources say that the two remained in a group most of the night but Maks was pushin up. [more…]

Maks was whispering into her ear and hugging her, They looked very flirty with each other…She had a huge smile on her face and looked like she was having a great time.”

However, the two appeared to leave separately.  They were seen hugging it out towards the end of the night.  Lopez stayed and Maks left with one of his boys.

Although I have to admit that Maks is a step up form Casper (not so)Smart, he is a small step. The guy is a douche.  I know women are attracted to a—holes but at 44 years old that kind of, sort of wears off.  I would say their ego’s alone could never sustain a relationship, however Kim and Kanye are making a go at it, and that’s two Divas at their best. Maks is an egotistical brat and I don’t think he could handle playing second fiddle to Lopez.

For those who thought Maks was in love with Meryl, it’s ‘Dancing with the Stars’, not ‘The Bachelor’.  He did what he needed to do and that chemistry between the two helped him get his trophy.  The question is, what’s Maks next move?  And J-Lo…..she just needs to simmer down. For those Diddy J-Lo fans, who thought maybe since she will be spending a large part of her summer in NY, that there would be some rekindling of that flame; that’s never going to happen.  Just recently, Diddy continued the feud between the two by responding to comments J. Lo made about saving him or Ben Affleck from drowning…I believe she said something to the effect of, “I’d let both those mother f–kers drown”.

Diddy used a guest appearance on the “We Dem Boyz” remix and referenced J-Lo’s new song “I Luh Ya Papi” and fired shots.  Right around the 2:02 mark, Diddy goes in hard,

“She give me he*d, I think she knows something. Screaming out, ‘I luh you papi,’ like my old woman.”

And for you ladies who insist on loving a Douche…I will leave you with a an incredibly good looking picture of Maks.  You can thank me by a few likes and shares……(I’m a pimp, and celebrities are my whores – there is no shame in my gossip game)