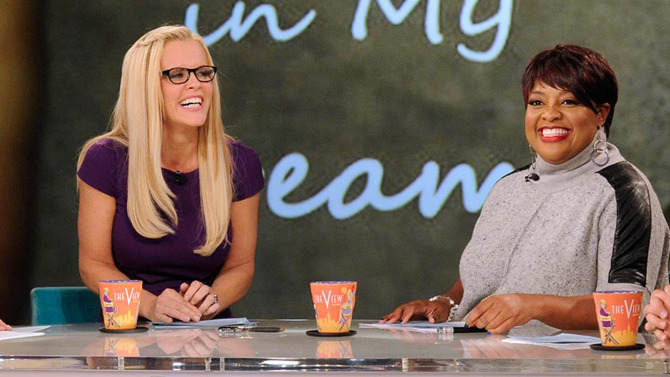 “The View” cleans House. Whoopi Goldberg’s the Only one Left with a Job!

For Sherri, this has not been a good year. First her and hubby Big Sal split, now she gets kicked to the curb by ABC.  She is handling the whole thing with class (at least publically).  She released a statement confirming her departure,

“It’s been seven wonderful years on The View, and after careful consideration it is time for me to move on, I am extremely grateful to Barbara Walters and Bill Geddie for giving me the opportunity. I look forward to the business opportunities that lay ahead for me and I am incredibly grateful to my View family and my fans for supporting me on this journey.”

“Consideration”?  The only consideration she had was if she wanted her personal belongings in a cardboard box or plastic bag!

Jenny also tried to make it seem like she had a say in the mater.  She tweeted,

“My view will be changing too. … Thanks to everyone at the show for your dedication and an amazing year.”

I hate to admit it, but it looks like Elisabeth Hasselbeck’ is WINNING!!  Blech!!

WHEN IS THEIR LAST SHOW?

Good question.  It’s reported that contract negotiations broke down with Sherri and they simply decided not want to renew McCarthy’s deal.  The show will be taking a week off and for the holiday and there is no word confirming that they will even be back to say goodbye. That was the initial report, however media outlets are starting to confirm that the ten Daytime Emmy nominated producer is negotiating his contract.

Whoopi appears to be good to go.  At age 58 with a net worth of $45 million, Goldberg has been on The View since 2007.  She was the replacement for Rosie O’Donnell

You betcha.  I’m hearing that Rosie could be making a comeback and perhaps Laila Ali…..  I say bring some dudes into the mix.  Bill Rancic??  Or How About Nick Cannon??

Ok – I guess that’s a NO on Nick Cannon!