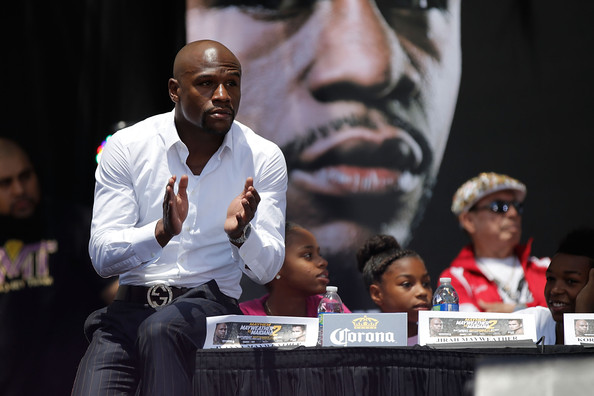 Mayweather Admits to Sleeping with T.I.’s Wife during His Press Conference! Then takes it back! (Video)

Mayweather will be defending his titles once again next week, in what will be one of a few fights he has left in his career. During his pre-fight press conference you can hear someone from the Audience yell,

Then pretty clearly you can hear Mayweather’s response,

What about the b-tch? I was f-ckin’ his b-tch. Money Mayweather gon’ make it do what it do, baby!

I can totally see why he would say something like that. Here he is promoting what would be probably his next to last fight, his been training his ass off, and someone wants to ask him about T.I. and Tiny? So, he decided to ruffle a few feathers….or did he? Here is the clip. [more…]

BUT THAT’S NOT WHAT I SAID!!

After the clip from the press conference went viral, as you can expect, Mayweather contacted TMZSports and retracted the statement. Not so much of a retraction, but he explained that the audio was not clear and he was misquoted. He clarified things by stating that what he actually said was,

If you watch closely, in fact, you can see that he might have said the two words, “He thinks”. This is much better for Mayweather. The disrespect is still there, without actually admitting that he smashed Tiny. Blech!! TI AND TINY RESPOND TOO

Tiny said it was probably retaliation from her diss at the MTV awards. During the red carpet interviews, Mayweather went to talk to her and she wanted no parts. He went to grab her arm to talk and she completely ignored him, and it was all caught on live TV. She also confirmed that she and Floyd never slept together. Here is the MTV diss in case you missed it.

T.I.’s response is exactly what someone should say in matters like this. When TMZ approached the rapper he simply said,

“I hope he is enjoying himself. God bless him.”

Wow. From someone who is worth $50 Million dollars, who is dumb enough to walk up to a boxer and punch in a public restaurant, I’m actually quite surprised at his common sense response. Let’s hope it’s not because he has something shady planned. Let’s pray that it all ends here.