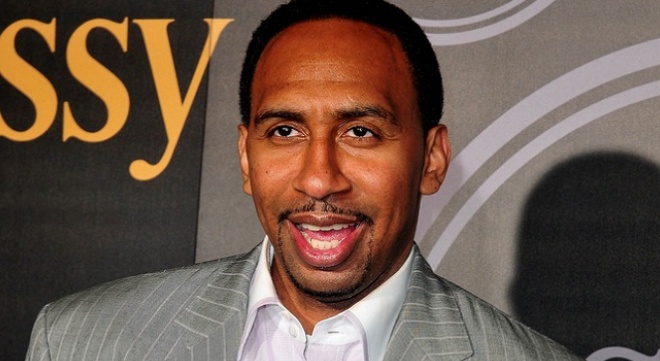 ESPN’s Stephen A Smith faces Outrage after Suggesting for Women to Stop Provoking Domestic Abuse. Why he’s right and we Heard wrong.

Yesterday we learned that Ray Rice was only penalized by the NFL with a two game suspension. Most people saw that as way too lenient including myself. This, if you remembered came as a result of Rice knocking his then fiancé (now wife) unconscious at a casino. The Casino’s security camera footage showed him dragging her life-less body out of the elevator like a rag doll. The video was shocking, especially when you realize that Rice is built literally like Mike Tyson. He is 5’8” and 212 lbs and about 12% bodyfat. Quite frankly he’s lucky he didn’t kill her.

Smith, who is known for being outspoken, and is considered the epitome of an angry black man, went on one of his rants regarding the issue. During his meandering, he makes a few statements that when pulled out of context, suggest blaming the victim for domestic abuse. Some of his comments were,

Let’s make sure we don’t do anything to provoke wrong actions,

..I think that just talking about what guys shouldn’t do, we got to also make sure that you can do your part to do whatever you can do to make, to try to make sure it doesn’t happen. [more…]

….AND THE BACKLASH BEGINS
Not only did this draw criticism and backlash from fans, it also outraged his colleague. Michelle Beadle, who is cohost of SportsNation on ESPN2, sent out a couple of tweets to show just how upset she was at Smith’s comments.

So I was just forced to watch this morning’s First Take. A) I’ll never feel clean again B) I’m now aware that I can provoke my own beating.

I’m thinking about wearing a miniskirt this weekend…I’d hate to think what I’d be asking for by doing so @stephenasmith. #dontprovoke — Michelle Beadle (@MichelleDBeadle) July 25, 2014

I was in an abusive relationship once. I’m aware that men & women can both be the abuser. To spread a message that we not ‘provoke’ is wrong

Smith is no stranger to twitter and getting killed after statements he’s made in the past, but after seeing the comments from his own colleague, enough was enough and he took to twitter in efforts to stop the madness. He posted the following tweets before they were deleted,

WHY STEPHEN WAS ACTUALLY RIGHT AND WE ALL HEARD WRONG

The issue here is that Steve is known for being an arrogant ass. That’s partly why we watch him and why he has a job at ESPN. His anger is really passion and his arrogance is confidence, but it makes him a very polarizing figure and people either watch him because they love him or love hating him. Both make him good at what he does.

However, that’s the reason, the media took just a part of what he said, pulled it out of context and ran with it.

If you listen to the entire commentary you will see that Smith is not stating just women, he is speaking in general. He is stating that if you are in a dangerous situation, do not provoke the situation because although it’s wrong, you might not survive the outcome.

This is the advice that I would give my daughter or son. This was the advice given to me. Staying with the police example; if the police pull me over for a speeding ticket, I put my hands on the wheel where the officer can see them. Then I reach for my license and registration only when he can see my hands. I say “yes officer” and “no officer”. I don’t have to do this, in fact maybe I shouldn’t do this, but I do not want to get my ass beat because I might not survive the beating. I want to get where ever I was going and live my life. I have a daughter and a family to take care of, I might not survive the ass whopping so why chance it. If Eric Garner took that advice, the father of six would be alive today.

If you know you are with a man that is an idiot, a known hot head, that deserves to be in treatment for anger management and domestic abuse, it’s not your job to push his buttons. If you see that he can or has been angry enough to hit you, then don’t provoke him. Fall back and as soon as you can remove yourself from the situation.  If you know he has a temper and can fly off the handle, provoking him just might be the last thing you do. Yes he will go to jail, but now you have just possibly lost your life. If you don’t think women like to push buttons, just watch Solange in the elevator with Jay-Z.

Jay did the right thing, but he also doesn’t play football for a living. He’s not in the weight room, or on the field hitting and getting hit for a living. I would have done exactly what Jay-Z did, but I’m not sure how many guys I know who would have been able to take that type of provocation without retaliation.

FACE IT…LIFE IS NOT FEAR

Should you be able to wear a short skirt, invite a man back to your place at 3:00 AM, make out with him hot and heavy on the bed and then say “that enough”.  Yes.  If that man rapes you, it’s 100% wrong, he deserves to be jailed and his balls cut off, but you also put yourself in that situation and took a risk that didn’t need to be taken.  He is now in jail but you are also raped.  It can’t be undone.  What is more important?

Life is not fair.

A passenger planes with 298 people should be able to fly over the Ukraine without getting shot down by missiles. Life is not fair.

Stephen A Smith – as a man with two sisters, raised by a single mother and now the father of a one year old baby girl – my advice to her is: Don’t provoke him, remove yourself from the situation and call Daddy. I’ll take care of the rest.

I’m riding with you on this one brotha!!