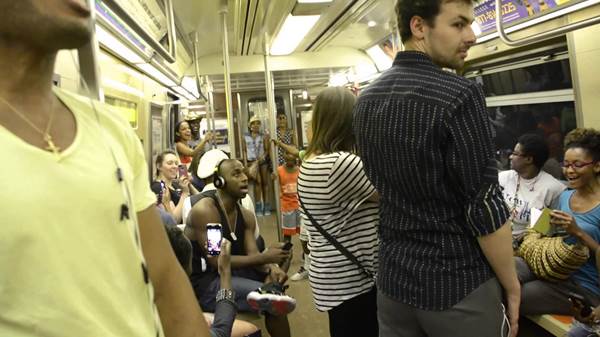 Cast of the Lion King Poses as Passengers and Surprises NYC Subway Riders with Surprise Performance.

Why doesn’t this ever happen when I’m on the Subway? When I’m on the train, that door opens and some dude with one tooth, wearing an old Karl Kani jumpsuit and a box of 10 year old bags of M&M’s strolls in and pitches his life story in attempts to get my spare change.

These guys ride the train and get a Tony Award winning, Broadway performance. If you haven’t seen “The Lion King” then you really need to check it out. Last year it became the first Broadway show to eclipse the $1 billion dollar mark. As a way to give back, the cast decided to give Subway riders a surprise performance.

During a break in the show back in June, the cast got on the train as if they were regular passengers and then suddenly broke into “The Circle of Life”.

It’s funny because this is New York. Some passengers realized it was the Lion King cast, and some passengers were just like, “I wish these black people shut up”; but by the end of the song everyone was rocking out. [more…]

Here is the clip below!