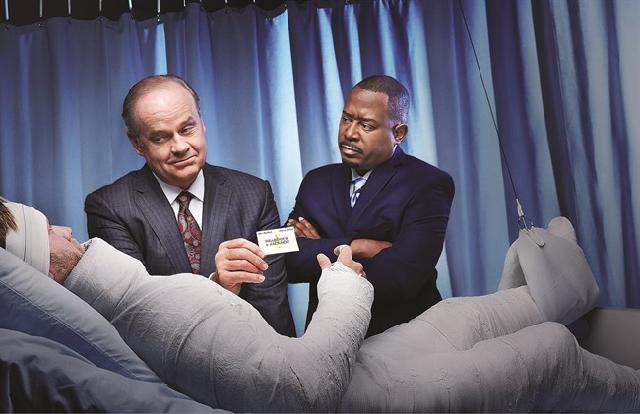 REVIEW: ‘Partners’ – Martin Lawrence and Kelsey Grammer Back on TV and a Little Rusty

I meant to post this last week and the site crashed – so I might update this after I watch the next two episodes, but this is how I was feeling last week after watching the premiere and the follow up show.

This show is either going to fail miserably or the unlikely duo is going to be a huge hit. To be fair it’s really hard to judge a show on the first two episodes, but that’s life…and life’s not fair.

Kelsey Grammer and Martin Lawrence play two lawyers that are polar opposites; not just culturally but also in the way they practice law and live their lives. Martin’ character, Marcus Jackson is an all around good Samaritan and community activist. He is going through a rough divorce and lives with his mom played by TV sitcom veteran Telma Hopkins. Kelsey Grammer plays Allen Braddock, a shiesty slick attorney who has been fired from his father’s law firm, married to a trophy wife and has a smart mouthed step daughter.

When you look back at Grammer’s work on Frasier, Martin’s comedic genius on Martin and the fact that Grammer has executive produced two successful black comedies; Girlfriends and The Game; this is a recipe for success. [more…]

AND THE VERDICT IS…..

I really wanted this to be good. The truth is, it’s not. However it does have a lot of potential. The problem with these vets is that they sense that this is one of a half dozen opportunities left in this business and they feel the need to make this successful. The entire first two shows appear to be hard work for the two who have previously made comedy look easy and enjoyable.

Grammer delivers much more comfortably than Lawrence but that’s not saying too much. The issue is it’s like watching Martin on the set of Fraiser. It’s very cumbersome and lumpy and it’s hard to watch. I liken it to watching your favorite fighter who didn’t retire fight his last fights. He used to be great, but watching him work through this beating is just difficult. There are two employees of the law firm – one who is a gay paralegal, and one who is supposed to be a witty, attractive young assistant. She is just witty.

To their defense, both characters have promise and they do their best with the script and writing but the entire thing is cringworthy.

Now…here’s a clip for your 5th.