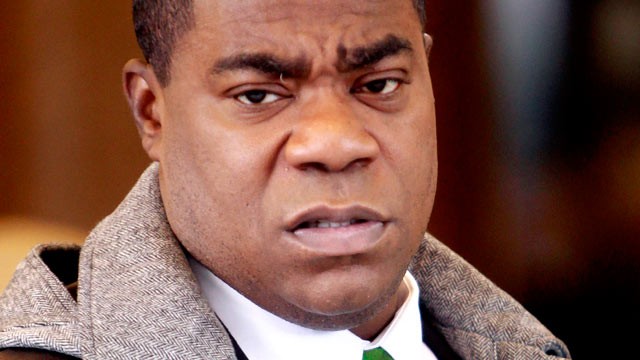 Once Tracy left the hospital we all just assumed he was doing well.  We so the photos of Tracy smiling leaving he hospital and we were like Phew!  We are learning from his lawyer that this is not the case.  T-Morg is having a tough go at things.

There have been rumors of his injuries ranging from death to needing to get his leg amputated to having just a broken arm.  His confirmed list of injuries include:

Those are the physical injuries.  The mental injuries are quite deeper.  The accident killed Morgan’s comedy writer, mentor and friend James McNair and seriously injured his other passengers that were traveling with him in the limo van: Jeffrey Millea, his wife Krista and Ardie Fugua.

Morgan’s attorney, Benedict Morelli  visited The Today Show and confirmed that Morgan was having issues,

The truth is he’s struggling, but he’s fighting hard,

He’s got the fighting spirit, but every day is different. Some days he’s very down.

Now, there’s been a couple of people who said he’s doing great, And that’s not true. What is true is he’s struggling and he’s fighting. [more…]

Morelli also talked about how they plan to sue Walmart for the entire thing. Morelli says that they want to prove that Walmart has a culture of pushing their drivers to the limit, which is what he feels caused the driver of the truck which caused the accident to fall asleep behind the wheel.

The driver, Kevin Roper has pleaded not guilty of vehicular manslaughter and assault.

Here is his Today show interview below:

Visit NBCNews.com for breaking news, world news, and news about the economy

Part of this entire thing is damage control.  He is not going after Roper because Roper doesn’t have the money; Walmart does.  He is on the Today Show to reset the landscape that Tracy upset when he was photographed smiling and throwing up deuces to the camera.  This doesn’t look like a man who just lost his best friend. I’m not saying that Tracy is not suffering, I’m just saying posing for the camera and smiling sure doesn’t help his case for pain and suffering.  Even if he is a comedian.