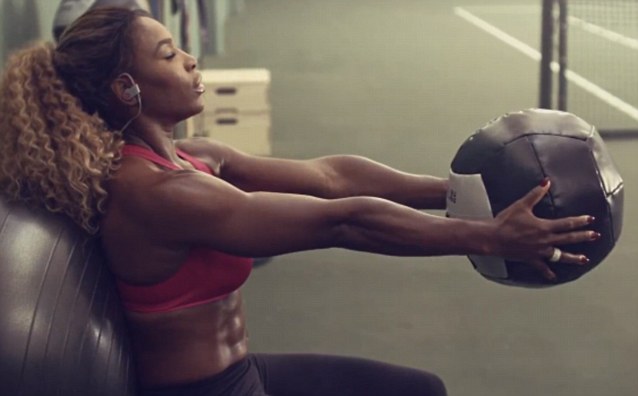 I have always been a fan of Serena Williams. Not just a fan, but a huge fan. I denounce all those comments that she looks like a man, or that she’s too muscular or how about comments that her butt is too big. Are you kidding me? Serena’s cheeks are hand carved spheres handed down from the God of Glutes. They are a divine gift to this generation. Serena is all woman period.

Despite her killer body, she also has a killer work ethic that has enabled her to stay at the top of the tennis game well past what was supposed to be her prime. Williams holds the most Major singles, doubles, and mixed doubles titles combined amongst active players, male or female. When she branches out into other things like, fashion or does commercials, I get concerned but she somehow is able to stay focused enough on her game to keep her on top. [more…] She also became one of only five women to ever occupy the number one spot for at least 200 weeks.

PHEW!! How’s that for a resume?

Beats has been producing some great sports commercials as of late. Without exaggeration, these commercials are on par with any Nike ad we’ve seen through the years. Do you rember that epic World Cup ad? That commercial is now sitting with 24 million views?

This commercial does it again. It contrasts Serena’s hard work, dedication and hunger against snapshots of where she started from in Compton. One of the most powerful parts of the ads (aside from her thighs) is that letter that appears she wrote as a young girl which dictates her goals in life including winning the US Open. I don’t know if that letter is fact of fiction, but it’s powerful. It lets fans know, if you have a dream and work hard, anything is possible….and oh yeah – Beats by Dre now has wireless headphones.

Watch the ad below!