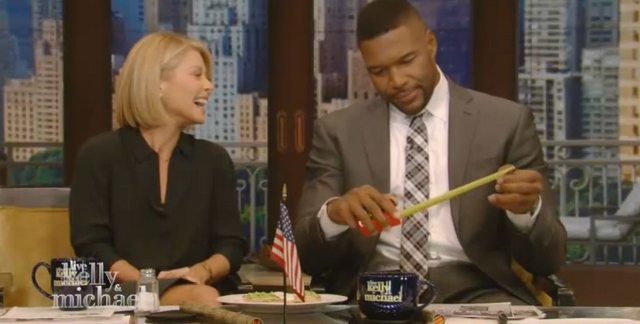 What would Regis Philbin say about this? Kelly Ripa, Michael Strahan and executive producer/professional troll Michael Gelman spent over two minutes discussing the size of the new iPhone 6.

It all started as a legit discussion, but then it just turned into one hilarious penis joke. And after watching the video, I think Kelly Ripa is the one to blame for this. How she managed to keep a straight face during this conversation is beyond me.

Michael Strahan tried to keep a straight face, but he ended up giggling throughout the video. He even tried to stop the discussion at one point; however, Gelman and Ripa were content letting the dirty conversation continue.

Check out the hilarious video down below…

That’s probably as dirty as you can get on morning television. Kelly Ripa did a masterful job of not crossing the line. She played it perfectly, so perfectly that we’re pretty sure some of their viewers didn’t even realize they were joking about penis size.