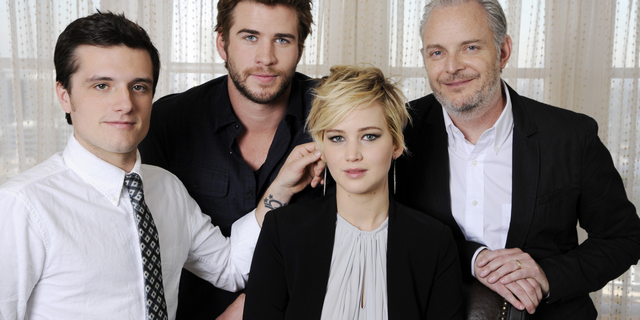 Ah, yes, another story about all those nude photos. There were a number of celebrities who were victimized, but it seems all anyone cares about is Jennifer Lawrence. Is it because more people wanted to see her naked? Is it become she has more fans than any of the other victims? It’s probably a combination of the two.

Anyway, for some reason, the victims of this crime have been forced to defend themselves, which is really silly. What did they do that was so wrong? Everyone takes nude photos. Your grandmother? She takes nude photos. Sure, she might still get those photos developed at CVS, but she’s still going to stuff them inside Larry’s mailbox down the street. The point I am trying to make here is that Jennifer Lawrence shouldn’t have to apologize or defend herself. And her friends, like co-star Josh Hutcherson, shouldn’t have to defend her either. However, that is how Hutcherson spent most of his time at the Toronto International Film Festival.

Instead of focusing on his new movie, Escobar: Paradise Lost, the media seemed more interested to hear what he thought about Lawrence’s nude photo leak.

“It’s fu—g horrible. I haven’t spoken to her since it happened, but as far as the public, Twitter, and media have reacted, it’s awful. We act because it’s what we want to do.  I’ve acted since I was 9 years old because it’s my job, it’s what I’m good at, and it’s what I love to do. I don’t want attention.

I don’t want to have my private life looked into or have people think they deserve to know about my private life. And then people say, ‘Well, then you shouldn’t have become an actor.’ F–k that. I didn’t choose all that. I chose to be an actor.”

The 21-year-old actor was asked about the nude photos by multiple reporters. He also told the Toronto Star the following…

“You have a certain public recognition and whatnot. But it’s not about having your private life literally looked into and stolen from you. Becoming an actor shouldn’t mean that you have to deal with being stalked.”

It’s hard to really argue with anything he is saying. But the real question that should have been asked is, “How many times did you look at them?”