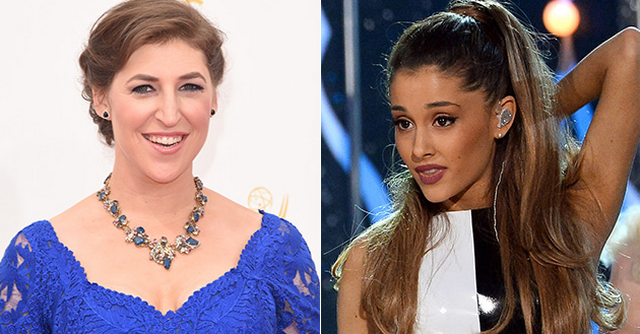 Oh, snap! The nerds are attacking. Mayim Bialik, one of the stars of The Big Bang Theory, apparently got bored the other day and decided to write a blog post about Ariana Grande and her naughty billboards.

She titled the blog post, “The Problem With That Giant Billboard Of Ariana Grande.”

“There is one [billboard] for Ariana Grande, and I will go ahead and admit I have no idea who she is or what she does. Based on the billboard, she sells lingerie. Or stiletto heels. Or plastic surgery because every woman over 22 wishes she has that body, I’m sure.”

As you can see, she’s not exactly a fan of Ariana Grande. The 38-year-old neuroscientist didn’t stop there. She continued by insinuating Ariana’s only talent is her pretty face.

“Why is she in her underwear on this billboard though? And if she has a talent (is she a singer?), then why does she have to sell herself in lingerie?”

While I think we can all agree the world is a filthy place, I don’t like how Bialik acted like she had no idea who Ariana Grande was. I mean, just last week I wrote the following about Ariana in a post.

“We all have heard at least one Ariana Grande song. Even if you try to avoid them, the 21-year-old singer/actress has somehow managed to take over the radio. We don’t understand it. When she reaches those high notes, panic sets in and the search for whoever is strangling all those poor kittens commences.”

And then I continued by explaining how hard it is to dislike Grande because of how cute she is. This basically proves Bialik’s point, which I agree with her on. However, when she claims to have “no idea” who Grande is, it just comes off disingenuous. Yeah, she might not know the name of any of her songs, but I guarantee you she knows exactly who she is.

Why else would she write a blog post about a random lingerie model on a billboard? Even if she had to Google Ariana Grande’s name, she still knows how popular and successful the 21-year-old singer is.  To act like she still has no idea who this person could be is just silly. She was probably exaggerating to help prove her point, but it was unnecessary. She might not agree with how Ariana is selling records but that doesn’t mean she hasn’t worked hard to get where she is.

There are some people out there who look at The Big Bang Theory as the Ariana Grande of comedy. Yeah, they film the show in front of a live studio audience, so some of the laughter you hear every five seconds is real. But we all know they add in fake laughter to make it sound better on television.

If their show is truly the best comedy on television, why do they need to let their audience know when to laugh? There isn’t some little troll popping out of my friend’s pocket telling me to laugh when he/she says something funny.