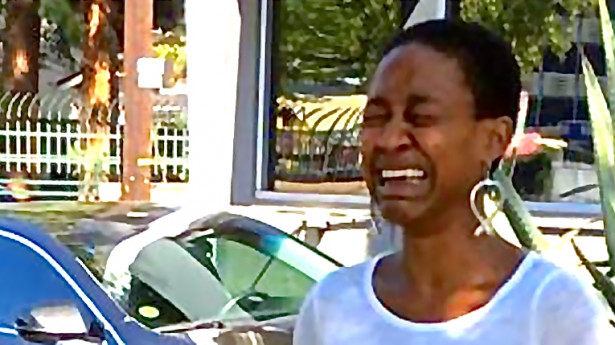 After we reported out on the edited CNN interview and the multiple audio bites of the actual arrest, Danielle Watt’s continues to be called out on her self-riotous bull-crap.

More information regarding the “lewd” act which incited the original call to police that caused the incident has been released. TMZ “somehow” got their hands on photos that clearly show that Danielle Watts on top of her boyfriend, straddling him, bracing herself with her hands on the sunroof.

Eyewitnesses who worked in the super busy area just outside the CBS lot in Studio City say that Watt’s boyfriend was sitting with his legs outside the car with his feet on the ground. Watts was then straddling him with her breasts out and was grinding on top of him. When she was done, she reportedly reached into the center console, pulled out some napkins and wiped them both off. [more…] Not only were the police called but someone actually went down there to ask the couple to stop but they continued despite learning that people in the building were watching them.

Although the pictures don’t confirm that the two were actually having sex in public, it does show that the police had more than a good reason to stop and question the couple and ask them for ID. In regards to the photos, I say, “if it looks like a duck…..”

My advice to Watts would be to stop playing the race card and acting like a victim and start acting for a living. It looks like that car needs a little help….that bumper tho’